From the Bookshelves: One Billion Americans: The Case for Thinking Bigger by Matthew Yglesias 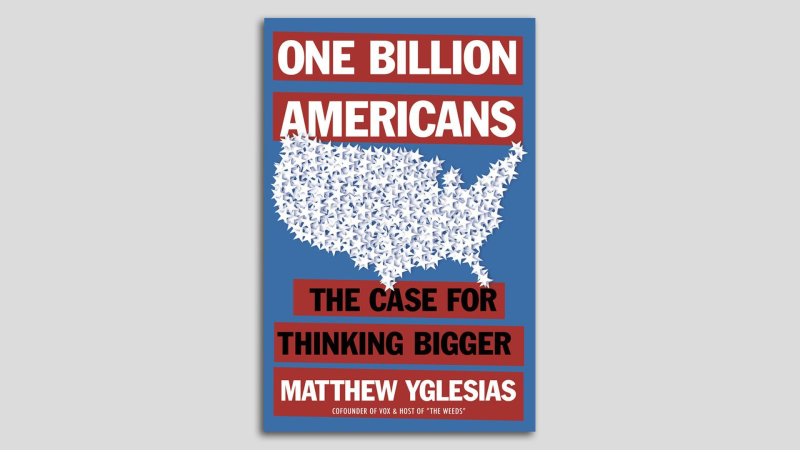 One Billion Americans: The Case for Thinking Bigger by Matthew Yglesias (2020)

The publisher's description of the book:

If the most challenging crisis in living memory has shown us anything, it’s that America has lost the will and the means to lead. We can’t compete with the huge population clusters of the global marketplace by keeping our population static or letting it diminish, or with our crumbling transit and unaffordable housing. The winner in the future world is going to have more—more ideas, more ambition, more utilization of resources, more people.

Exactly how many Americans do we need to win? According to Matthew Yglesias, one billion.

From one of our foremost policy writers, One Billion Americans is the provocative yet logical argument that if we aren’t moving forward, we’re losing. Vox founder Yglesias invites us to think bigger, while taking the problems of decline seriously. What really contributes to national prosperity should not be controversial: supporting parents and children, welcoming immigrants and their contributions, and exploring creative policies that support growth—like more housing, better transportation, improved education, revitalized welfare, and climate change mitigation. Drawing on examples and solutions from around the world, Yglesias shows not only that we can do this, but why we must.

Making the case for massive population growth with analytic rigor and imagination, One Billion Americans issues a radical but undeniable challenge: Why not do it all, and stay on top forever?"

Matthew Yglesias is the co-founder and senior correspondent for Vox. He also hosts the political podcast “The Weeds” and is a regular contributor to NPR's All Things Considered. Prior to Vox, he was a columnist for Slate, a senior fellow at the Center for American Progress, and wrote for The American Prospect and The Atlantic. A New York City native, he currently lives in Washington, DC.

Bryan Walsh for Axios summarizes the argument in One Billion.