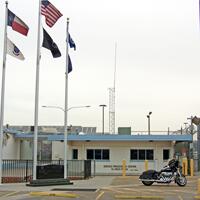 The El Paso, Texas, detention center where a woman alleges she and other detainees were sexually assaulted and harassed in camera blind spots.

U.S. Immigration and Customs Enforcement (ICE) deported a key witness in an investigation of sexual assault and harassment at a detention center in El Paso, Texas, Lomi Kriel reports for The Texas Tribune and ProPublica. The woman “told lawyers about a ‘pattern and practice’ of abuse [at the facility], including that guards systematically assaulted her and other detainees in areas that were not visible to security cameras. … At least two more women have since come forward with similar allegations of assault.” The deportation comes just days after the woman’s lawyers filed a habeas petition to move her out of ICE custody amid intimidating threats from guards