From the Bookshelves: Hatemonger: Stephen Miller, Donald Trump, and the White Nationalist Agenda by Jean Guerrero 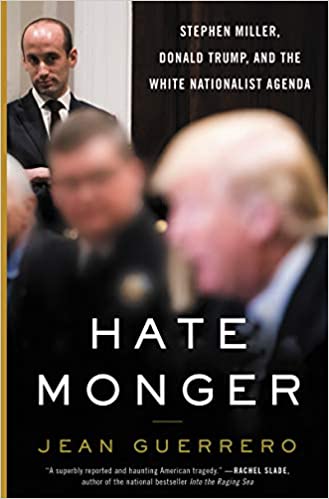 Interested in the background and mindset behind the mastermind of the Trump administration's immigration policies?  If so, here is a book for you.

Hatemonger: Stephen Miller, Donald Trump, and the White Nationalist Agenda by Jean Guerrero is available tomorrow. The publisher describes the book as follows:

"Stephen Miller is one of the most influential advisors in the White House. He has crafted Donald Trump’s speeches, designed immigration policies that ban Muslims and separate families, and outlasted such Trump stalwarts as Steve Bannon and Jeff Sessions. But he’s remained an enigma.

Until now. Emmy- and PEN-winning investigative journalist and author Jean Guerrero charts the thirty-four-year-old’s astonishing rise to power, drawing from more than one hundred interviews with his family, friends, adversaries and government officials.

Radicalized as a teenager, Miller relished provocation at his high school in liberal Santa Monica, California. He clashed with administrators and antagonized dark-skinned classmates with invectives against bilingualism and multiculturalism. At Duke University, he cloaked racist and classist ideas in the language of patriotism and heritage to get them airtime amid controversies. On Capitol Hill, he served Tea Party congresswoman Michele Bachmann and nativist Alabama Senator Jeff Sessions.

Recruited to Trump’s campaign, Miller met his idol. Having dreamed of Trump’s presidency before he even announced his decision to run, Miller became his senior policy advisor and speechwriter. Together, they stoked dystopian fears about the Democrats, `Deep State' and `American Carnage,' painting migrants and their supporters as an existential threat to America. Through backroom machinations and sheer force of will, Miller survived dozens of resignations and encouraged Trump’s harshest impulses, in conflict with the president’s own family. While Trump railed against illegal immigration, Miller crusaded against legal immigration. He targeted refugees, asylum seekers and their children, engineering an ethical crisis for a nation that once saw itself as the conscience of the world. Miller rallied support for this agenda, even as federal judges tried to stop it, by courting the white rage that found violent expression in tragedies from El Paso to Charlottesville.

Hatemonger unveils the man driving some of the most divisive confrontations over what it means to be American––and what America will become.'

Vanity Fair published an excerpt of the book.  I found this paragraph from the excerpt revealing and not surprising:

"Stephen Miller was into mobster movies. Growing up, the walls of his bedroom were decorated with framed posters of Casino and Goodfellas—two of his favorite films. The characters in the Martin Scorsese films are largely amoral, but they live by a code. In Goodfellas, Robert De Niro’s character summed it up, “Never rat on your friends, and always keep your mouth shut.” Miller occasionally styled himself after De Niro’s characters in those films. He wore a golden pinkie ring and slicked back his hair, polo shirts and button-downs with nice pants and a jacket—so he looked like a mobster."

But times changed, and a quality online casino should accept all kinds of payment methods, whether you're a newbie or an experienced player. This means you can select a table with a high limit if you're a VIP, or a low-limit game for average Joes. That's why I play table games at https://wildtornado.casino/en-CA/games/table_games this online casino. All of these options will make your online gambling experience safe and enjoyable, regardless of your bankroll. However, you should always remember that the best casinos should be licensed and offer a range of withdrawal methods to suit any budget.