An AR rendering of "NO MORE CAMPS" over Santa Anita Assembly Center in California by curator and writer Karen Ishizuka.  Courtesy 4th Wall For In Plain Sight 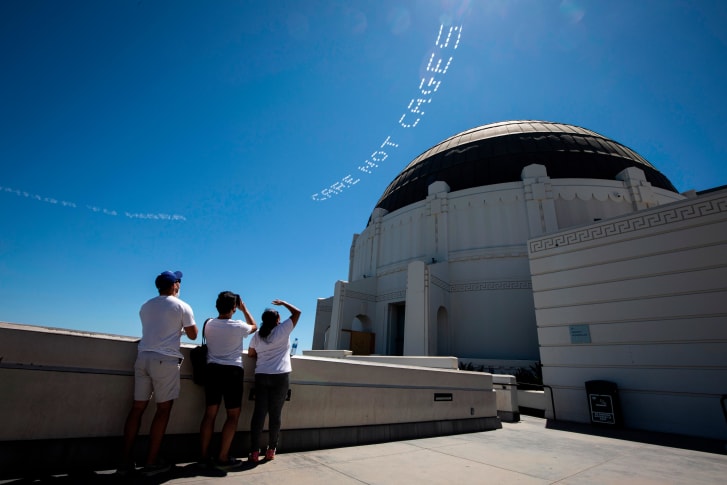 Tessa Solomon on ARTnews reports on a novel form of protest by artists of immigrant detention on the July 4 weekend.  She writes:  "Why protest the detention of immigrants across the United States on Independence Day? When asked that recently, artist Dread Scott responded with a Frederick Douglass quote: `What to the Slave is the Fourth of July?'”

Scott is one among the 80 artists participating in In Plain Sight. Over the July 4th weekend, skytyping planes will write artist-generated messages above 80 ICE detention facilities, immigration court houses, processing centers, and former internment camps. Each message will end with #XMAP, which, when plugged into social media, will direct to an online interactive map that offers a view of the closest ICE facilities to the user.

“In our imagination, immigration detention is something that exists along the Mexico-U.S. border, when in fact detention centers exist in every state,” said artist rafa esparza, who founded “In Plain Sight” with the Canadian performance artist and activist Cassils.

Visitors to the event’s website are encouraged to donate to local funds like the Black Immigrant Bail Fund and join the #FreeThemAll campaign, which advocates for the release of detainees from crowded facilities, where social distancing is often impossible right now. With “In Plain Sight,” esparza and Cassils are hoping to educate viewers—and to encourage the abolition of facilities such as these.