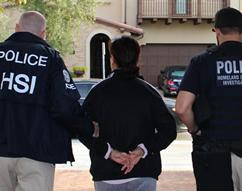 Among its many immigration measures, the Trump administration has promised to crack down on "birth tourism," a practice about which there has been debate.  A few days ago, U.S. Immigration and Customs Enforcement announced that a Chinese national was sentenced in absentia to 37 months in federal prison for participating in "a birth tourism scheme that engaged in visa fraud that allowed foreign nationals to come to the United States and give birth so their children would receive U.S. birthright citizenship."

According to he press release,

"Chen operated an Orange County-based business named You Win USA, which they marketed to pregnant foreign nationals – mostly from China – who wanted to come to the United States to obtain U.S. citizenship for their children. As part of the scheme, Chen, Li and Yan coached the foreign nationals to misrepresent the true intentions of their visits to United States at ports of entry.

You Win USA advertised that its `100-person team' in China and the U.S. had served more than 500 Chinese birth tourism customers. Chen and Li used 20 apartments in Irvine, charged each customer $40,000 to $80,000, and received $3 million in international wire transfers from China in just two years. You Win USA promoted the benefits of giving birth in the United States rather than in China . . . . "