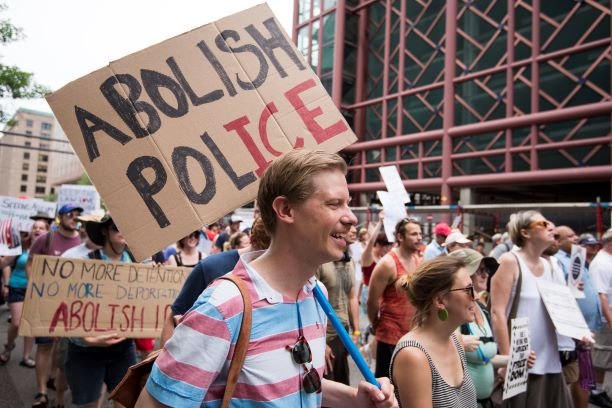 Protesters march at a rally in Minneapolis calling for the end of ICE. (Photo: Fibonacci Blue/Wikimedia Commons)

National attention is talking about the racial nature of law enforcement in the United States.   Will the fervor for reform of the criminal justice system spread to the racialized nature of immigration enforcement?

Muzaffar Chishti and Jessica Bolter for the Migration Policy Institute (As #DefundThePolice Movement Gains Steam, Immigration Enforcement Spending and Practices Attract Scrutiny) considers the relationship between the call for police reform and the reform of immigration enforcement:
"The nationwide outcry and protests following the May killing of George Floyd by local police officers in Minneapolis have sparked calls for fundamental reform of the criminal justice system. . . . Immigrant communities have echoed with grievances of their own—encapsulated over the last year or so in the campaign broadly labeled `Abolish ICE.'
Even a quick examination reveals that the muscular nature and shielding from accountability that Americans have come to accept as problematic—and increasingly unacceptable—with respect to local law enforcement are equally valid in the case of immigration enforcement."
The MPI report provides an in-depth look at the contemporary immigration enforcement apratus.
KJ