From the Bookshelves:Mary Jordan, The Art of Her Deal: The Untold Story of Melania Trump 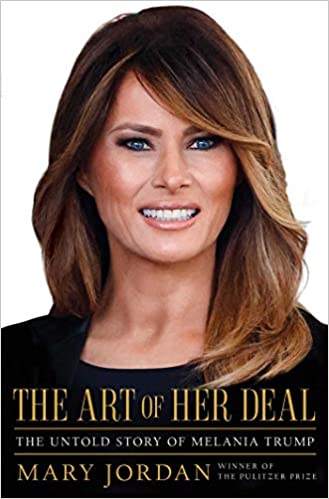 President Trump has made immigration restrictions and enforcement a high priority.  Martha Ross for the San Jose Mercury News highlights that President Trump's "Slovenian-born wife, Melania, is an immigrant who has never been fully transparent about her own immigrant journey, writes Mary Jordan, the author `The Art of Her Deal: The Untold Story of Melania Trump.'”  Read the article and book for more on Melania's immigration story.

Here is an abstract of the book:

"This revelatory biography of Melania Trump from Pulitzer Prize–winning Washington Post reporter Mary Jordan depicts a first lady who is far more influential in the White House than most people realize.

Based on interviews with more than one hundred people in five countries, The Art of Her Deal: The Untold Story of Melania Trump draws an unprecedented portrait of the first lady. While her public image is of an aloof woman floating above the political gamesmanship of Washington, behind the scenes Melania Trump is not only part of President Trump’s inner circle, but for some key decisions she has been his single most influential adviser.

Throughout her public life, Melania Trump has purposefully worked to remain mysterious. With the help of key people speaking publicly for the first time and never-before-seen documents and tapes, The Art of Her Deal looks beyond the surface image to find a determined immigrant and the life she had before she met Donald Trump. Mary Jordan traces Melania’s journey from Slovenia, where her family stood out for their nonconformity, to her days as a fledgling model known for steering clear of the industry’s hard-partying scene, to a tiny living space in Manhattan she shared platonically with a male photographer, to the long, complicated dating dance that finally resulted in her marriage to Trump. Jordan documents Melania’s key role in Trump’s political life before and at the White House, and shows why he trusts her instincts above all.

The picture of Melania Trump that emerges in The Art of Her Deal is one of a woman who is savvy, steely, ambitious, deliberate, and who plays the long game. And while it is her husband who became famous for the phrase `the art of the deal,' it is she who has consistently used her leverage to get exactly what she wants. This is the story of the art of her deal."