From the Bookshelves: Death in the Haymarket: A Story of Chicago, the First Labor Movement and the Bombing that Divided Gilded Age America by James Green 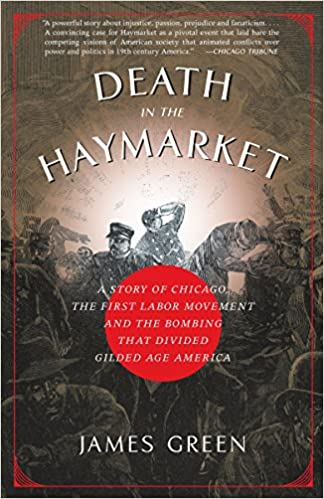 On May 4, 1886 in Chicago's Haymarket, a labor rally is interrupted first by a column of police officers, and then by a bomb from the crowd thrown into their ranks. The Haymarket affair would have major implications for the labor and social reform movement in the United States. James Green, author of Death in the Haymarket: A Story of Chicago, the First Labor Movement and the Bombing that Divided Gilded Age America, talks on this podcast about the events leading up to the bombing and the aftermath.

The bomb that exploded at a Chicago labor rally wounded dozens of policemen, killing seven.   A wave of mass hysteria swept the country, leading to a sensational trial, that culminated in four controversial executions, and dealt a blow to the labor movement from which it would take decades to recover. In his book, Green recounts the rise of the first great labor movement in the wake of the Civil War and brings to life the struggle for the eight-hour workday. Blending a gripping narrative, outsized characters and a panoramic portrait of a major social movement, Death in the Haymarket is an important addition to the history of American capitalism and a moving story about the class tensions at the heart of Gilded Age America.

Immigration was part of the story of the Haymarket affair.  As History.com recounts,

"The Haymarket Riot set off a national wave of xenophobia, as scores of foreign-born radicals and labor organizers were rounded up by the police in Chicago and elsewhere. In August 1886, eight men labeled as anarchists were convicted in a sensational and controversial trial in which the jury was considered to be biased and no solid evidence was presented linking the defendants to the bombing."