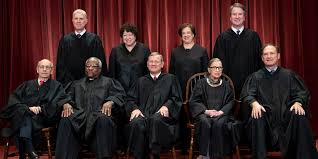 The Supreme Court today decided Department of Homeland Security v. Thuraissigiam.  Justice Alito, joined by the Chief Justice and Justices Thomas, Gorsuch, and Kavanaugh, as applied to the case at hand, the expedited removal statute does not does not violate the provision of the U.S. Constitution barring suspension of habeas corpus.  Thuraissigiam, who was apprehended about 25 yards from the U.S./Mexico border after entering the United States without inspection, did not seek release from custody, but an additional opportunity to obtain asylum.  The majority therefore held that, because it applies to challenges to detention, the Suspension Clause did not apply to this case and that the 1996 immigration reforms barred judicial review of the Thuraissigiam's asylum claim.  It also rejects the arguments that Thuraissigiam's due process rights had been violated, invoking extreme plenary power cases like Knauff and Mezei, which the U.S. government will likely find useful in the future in seeking to limit the rights of noncitizens seeking admission into the United States.
Justice Thomas concurred to "address the original meaning of the Suspension Clause."
Justice Breyer, joined by Justice Ginsburg, concurred in the judgment, emphasizing that, in this case alone, the expedited removal process as applied did not violate the Suspension Clause.
Justice Sotomayor, joined by Justice Kagan, dissented, concluding that the Suspension Clause had been violated by the denial of judicial review.  She wrote:  "Today’s decision handcuffs the Judiciary’s ability to perform its constitutional duty to safeguard individual liberty and dismantles a critical component of the separation of powers."  Justice Sotomayor also rejects the majority's due process analysis since Thuraissigiam was apprehended in the United States.
Stay tuned for further analysis.
UPDATE (June 26):  Nicole Narea on Vox ("The Supreme Court just allowed Trump’s expansion of deportations to go unchecked") looks critically at the Court's decision.
UPDATE (June 27):  Kari Hong offers the opinion analysis of Thuraissigiam  for SCOTUSBlog.
UPDATE (July 1):  Jeffrey Chase analyzes the Court's opinion.  His final line:  "Thus, as more asylum seekers are subjected to credible fear determinations under an increasingly uncertain standard, the Supreme Court's opinion has closed the lone avenue for obtaining federal court review of the propriety of a negative determination."
UPDATE  (July 2):  More on the decision from Aditi Shah on Lawfare.
UPDATE (July 7):  Amanda Tyler looks at the impacts of Thuraissigiam on Lawfare.
KJ