Soon on Your Bookshleves: The Battle to Stay in America: Immigration's Hidden Front Line by Michael Kagan 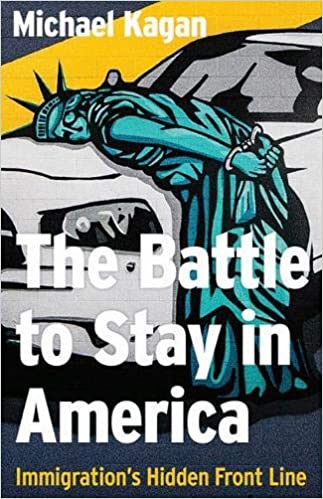 The Battle to Stay in America: Immigration's Hidden Front Line   by Michael Kagan (set for release on August 11, 2020)

The national debate over American immigration policy has obsessed politicians and disrupted the lives of millions of people for decades. The Battle to Stay in America focuses on Las Vegas, Nevada, a city where more than one in five residents was born in a foreign country, and where the community is struggling to defend itself against the federal government's crackdown on undocumented immigrants. Told through the eyes of a lawyer who works with immigrants, the book offers an accessible introduction to a broken legal system. It is also a raw, personal story of exhaustion, perseverance, and solidarity. Kagan describes how current immigration law affects real people's lives and introduces us to some remarkable individuals--immigrants and activists--who grapple with its complications every day. He also demonstrates how the law and its sometimes capricious and often cruel enforcement, far from solving problems, operate as a relentless attack against people and families who are in fact an integral and valuable part of our society.

Here are stories of people desperate to escape unspeakable violence in their homeland, children separated from their families and trapped in a tangle of administrative regulations, hardworking longtime residents suddenly ripped from their productive lives when they fall unwittingly into the clutches of the immigration enforcement system. Kagan also considers how the acrimonious debate over current immigration law is nurturing fear and animosity toward immigrants in the general public and inspiring acts of hatred against legal immigrants and nonimmigrant ethnic minorities. He considers how the crackdown on immigrants negatively impacts the national economy and offers a deeply considered assessment of the future of immigration policy in the U.S. He writes with both the cool rationality of an attorney and the passion of a loving father, puncturing popular myths about the danger that immigrants pose to our society and economy while exploring his own frustration trying to deal with the ambiguities, contradictions, and inhumane cruelties of the law and his personal fears for his adopted Ethiopian daughters growing up in a culture so fraught with xenophobic violence and governmental ineptitude.

The Battle to Stay in America is essential reading for anyone trying to understand the laws that govern immigration and the human--and often inhumane--impact of those laws on people subjected to them.