At the Movies in the Age of Coronavirus: Fast Times at Ridgemont High (1982) 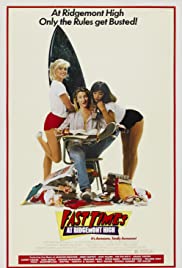 Fast Times at Ridgemont High (1982)  is the next film in the "At the Movies in the Age of Coronavirus" series.

The chronicles a school year in the lives of sophomores Stacy Hamilton (Jennifer Jason Leigh) and Mark Ratner (Brian Backer) and their older friends Linda Barrett (Phoebe Cates) and Mike Damone (Robert Romanus), both of whom believe themselves wiser in the ways of romance than their younger counterparts. The ensemble cast of characters form two subplots with Jeff Spicoli (Sean Penn), a perpetually stoned surfer, facing off against uptight history teacher Mr. Hand (Ray Walston), and Stacy's older brother, Brad (Judge Reinhold), a senior who works at a series of entry-level jobs in order to pay off his car and ponders ending his two-year relationship with his girlfriend, Lisa (Amanda Wyss).