The Other Problematic Outbreak As the coronavirus spreads across the globe, so too does racism 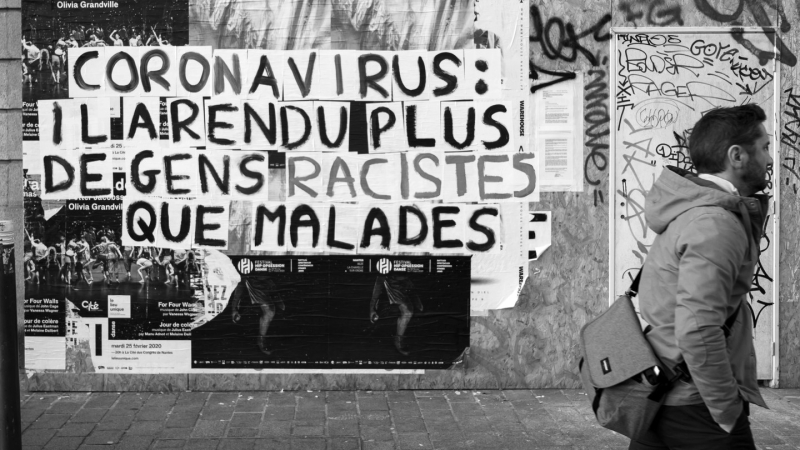 Activists in Nantes, France, denounce racism related to the pandemic with a sign that reads “Coronavirus: It has made more people racist than sick.”Estelle Ruiz / NurPhoto / Getty

As reported on the ImmigrationProf blog, racism surrounding the coronavirus outbreak has been in the news

"Wherever a pandemic goes, xenophobia is never far behind. Since the outbreak of the coronavirus (and the disease it causes, COVID-19) began, reports of racism toward East Asian communities have grown apace. (More recently, this has expanded beyond East Asian populations: Thailand’s public-health minister yesterday appeared to lash out at white foreigners who he said were dirty and spreading the virus in the country, adding that people should be more afraid of Westerners than Asians.)

The denigration of certain populations is a familiar symptom of viral outbreaks. Disease, after all, fosters fear, which in turn fosters discrimination. During the 1853 yellow-fever epidemic in the United States, European immigrants, who were perceived to be more vulnerable to the disease, were the primary targets of stigmatization. During the SARS outbreak, which originated in China, East Asians bore the brunt. When the Ebola outbreak emerged in 2014, Africans were targeted. For this reason, the World Health Organization, which has overseen the global response to the coronavirus outbreak, opted against denoting a geographic location when officially naming the new virus, as it did with Ebola (named after the river in the Congo, where it was first detected) and the 2012 Middle East respiratory syndrome, known simply as MERS. `Stigma, to be honest, is more dangerous than the virus itself,' Tedros Adhanom Ghebreyesus, the WHO director-general, stated recently. Still, some media outlets and U.S. leaders continue to refer to the disease as the `Wuhan virus.'”