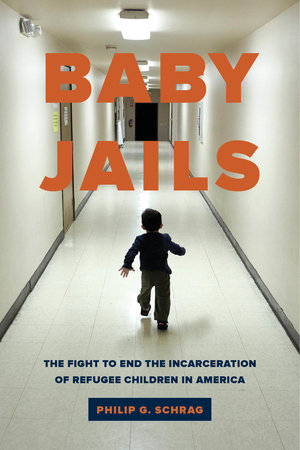 Kevin has already posted about Baby Jails, the new book from immprof Philip G. Schrag (Georgetown) that explores the detention of migrant children.

I write today as someone who recently devoured this book. Let me start by telling you two things about myself: I hate flying and I am not much of a fan of nonfiction books. Combining these two things, I tend to read a riveting YA novel while flying in an effort to distract myself from how many feet I am unnaturally suspended above the earth's surface. Yet I recently read Schrag's book over the course of 3 flights. It was utterly engrossing.

The book is jam-packed with law and yet manages to read like a narrative. You get a feel for characters (Jenny Flores, certain attorneys and judges) and find yourself rooting from the sidelines even as you know victories will frequently fail to live up to their promise.

The book included numerous vignettes and insights that were entirely new to me. For example, did you know Ed Asner was responsible for Flores' legal representation? Yes, the grumpy old man from Pixar's Up set out to help his housekeeper's daughter who was housed with Flores and connected the young women with Peter Schey, founder of the National Center for Immigrants' Rights (now the Center for Human Rights and Constitutional Law).

Here's another one: Leon Fresco represented the government in a 2015 lawsuit brought by Schey to enforce the Flores settlement -- arguing that the settlement didn't apply to children traveling with parents and that the agreement was "no longer equitable." Leon Fresco! I wrote about him a few years back -- he was a key player in the failed 2013 comprehensive immigration reform led by the Gang of Eight.

I'm also impressed by how comprehensive the book is. I recently spoke to a friend who is on the cusp of publishing a book and we talked about how, at some point in the writing process, the publisher will charge by the word for additions of any kind. Yet Schrag's book must have been edited and added upon right up until the last moment of publication. There is nothing of current import that is left behind (remain in Mexico, asylum cooperation agreements, third country transit).

This book is marvelous. A tour de force. I recommend it to everyone -- even terrified flyers. Instead of gasping at every bump in the jet stream you'll be scribbling away in the margins, furious at what our nation has done to children in the name of immigration enforcement.