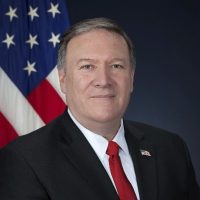 In late January, U.S. Secretary of State Mike Pompeo met with Lao foreign minister Saleumxay Kommasith. In a recently surfaced letter dated Feb. 3, U.S. Rep. Betty McCollum *D-Minn.) said the administration "is negotiating with (Laos) to allow for the deportation of longtime Hmong and Lao residents of the United States back to the country of their birth."  McCollum characterized the policy as "a direct attack on my constituents and their family members" and called the proposal "unconscionable."

The proposal could reportedly affect more than 4,500 Hmong and Lao U.S. residents who are not citizens and who have committed crimes or have deportation orders against them.  Many are lawful permanent residents but not U.S. citizens.  Many are in their 20s and 30s and came to the United States as young children during refugee resettlements in the 1980s and 1990s. They speak English and have few connections to the country of their birth.

According to Wisconsin Public Radio, a State Department spokesperson confirmed to WPR that the administration is calling on Laos to accept deported U.S. residents, and said that "the U.S. government is funding a reintegration program in Laos for those who need extra assistance."