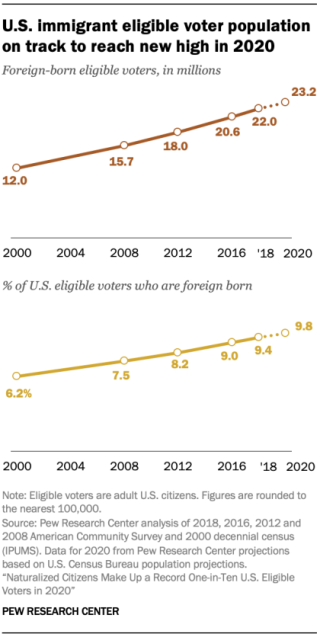 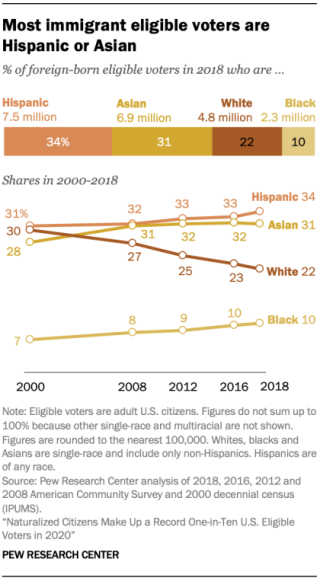 A growing number of naturalized immigrants possess the potential to influence the 2020 elections: a recent study says 1 in 10 voters. This is a record high, according to Pew Research Center estimates based on Census Bureau data, and it results from fast-growth in the immigration population (up 93% since 2000) and slower growth in the native-born population.

The largest share of newly-naturalized voters is Hispanic or Asian. Among Hispanic voters, 53% are Democrats, while 39% are Republicans, according to surveys by the Pew Hispanic. A 2018 survey of all Asian voters by researchers at AAPI Data and APIA Vote found 58% were favorable toward the Democratic Party and 34% toward the Republican Party. Overall, the growth of these two groups reflects the increased number of immigrants living in the U.S. since 1965, when the Immigration and Nationality Act permitted more migration from countries previously excluded on the basis of national origin quotas. It also reflects a rising number of immigrants naturalized from 2009 to 2019, partly driven by the desire to influence elections and immigration policy. Indeed, the USCIS has been unable to keep pace with backlogged citizenship applications.

Given that more than half of newly-naturalized voters live in the four states with the most people (California, New York, Texas and Florida) and that 46% of them live in states with primaries or caucuses taking place on or before March 3, they will have a substantial impact on coming primary elections.