DACAmented in the Age of Deportation by Roberto G. Gonzales

The CU Citizenship and Equality Colloquium hosted Professor Roberto G. Gonzales, Harvard Graduate School of Education and Director of the Harvard Immigration Initiative on Wednesday February 19, 2020 for a presentation of the latest data from the National UnDACAmented Research Project, which is the largest and long-running study of DACA recipients in the country. DU Sociology Professor Edelina Burciaga responded with comments highlighting the significance of the findings and the need to respond to the heightened vulnerability of DACA recipients in univesities, should the program's rescission be upheld in the Supreme Court.

The data are highlighted in the Harvard Immigration Initiative's latest issue brief (Under Siege: The Disturbing Impact of Immigration Enforcement on the Nation’s Schools) and Gonzales' co-authored paper “DACAmented in the Age of Deportation.”

Heightened immigration enforcement in public spaces has brightened the boundaries of exclusion for undocumented immigrants in the United States. Yet, these immigrants simultaneously experience belonging and inclusion within the personal and social spheres of their lives. This article explores this tension among young people with Deferred Action for Childhood Arrivals (DACA). Drawing on interviews with 408 DACA beneficiaries in six states, our analyses underscore the significance of personal and social spheres as spaces of belonging. DACA expanded these spaces, helping respondents derive meaning, agency, and membership in their everyday lives. However, these personal and social spheres were at times disrupted by hostile and exclusionary contests to function as spaces of vulnerability. Respondents experienced the boundaries between belonging and vulnerability as unstable and, at times, ambiguous-as they navigated a state of social liminality. Ultimately, conflicting sociopolitical climates at the national, state, local and institutional levels have created this social liminality.

Roberto G. Gonzales is professor of education at Harvard Graduate School of Education. His research centers on contemporary processes of immigration and social inequality, and stems from theoretical interests at the intersection of race and ethnicity, immigration, and policy. In particular, his research examines the effects of legal contexts on the coming of age experiences of vulnerable and hard-to-reach immigrant youth populations. Since 2002 he has carried out one of the most comprehensive studies of undocumented immigrants in the United States. His book, Lives in Limbo: Undocumented and Coming of Age in America (University of California Press), is based on an in-depth study that followed 150 undocumented young adults in Los Angeles for twelve years and has won five major book awards. In addition, Professor Gonzales’ National UnDACAmented Research Project has surveyed nearly 2,700 undocumented young adults and has carried out 500 in-depth interviews on their experiences following President Obama’s Deferred Action for Childhood Arrivals (DACA) program.

A full list of the speakers appears in the flyer and activities of the CU Immigration and Citizenship Law Program / Colorado Immigration Scholars Network. 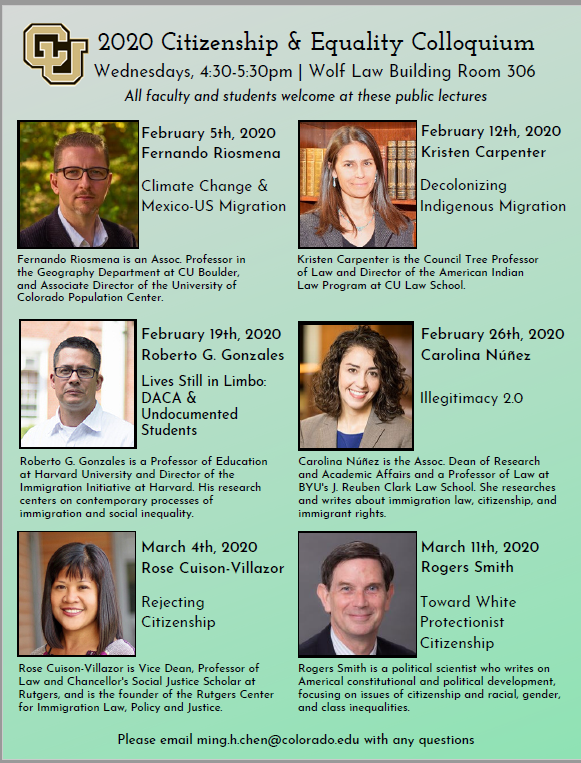