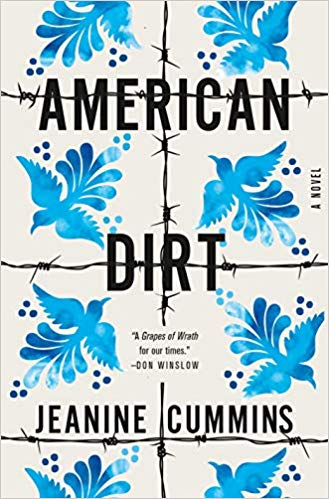 A couple weeks ago, ImmigrationProf posted an announcement of the release of the book American Dirt by Jeanine Cummins. Cummins received a huge seven figure advance for the book, which is a fictional account of a book store owner and her young son who flee the drug cartels in Mexico after the massacre of her family.

American Dirt was released with some rave reviews.  Oprah Winfrey announced that that the book was selected by her much-watched book club.  (Winfrey since has acknowledged the need to discuss the issues at the core of the controversy of the book.).

Rachel Martin on  WBHM also writes about the controversy:

"There’s a book you might have heard of by now. It’s called American Dirt, and it’s the much-hyped new novel from author Jeanine Cummins that was released this week.

It’s the story of a Mexican woman named Lydia and her 8-year-old son Luca, who flee their home and undertake a harrowing journey to the U.S. border after gunmen from a local drug cartel kill most of their family. It’s been hailed as `a Grapes of Wrath for our times.' In fact, that quote is on the cover of the book.

And that is one of the many problems with American Dirt, according to several critics. There have been tweet threads and essays, all arguing that the book deploys harmful stereotypes. Even a hashtag — My Latino Novel — has popped up on Twitter, where people are writing their own parodies. But there is so much more to say about race and identity in publishing, about who gets to tell what stories and which of those voices are elevated in the mainstream culture.

Los Angeles Times writer Esmeralda Bermudez has been one of the most vocal critics of American Dirt. `In 17 years of journalism, in interviewing thousands of immigrants, I’ve never come across anyone like American Dirt’s main character,' Bermudez says."

Seattle Review of Books on #AmericanDirt: When a novelist identifies as white until she writes a book about Mexican migrants in order 2 give a face 2 the “faceless brown mass” @ the border, trouble follows, dirt is raised, caca is thrown. & for good reason https://t.co/luuMjS5XwI

Critical reviews of American Dirt are growing in number.  Here is one by Ignacio Sanchez Pardo in the Washinton Post, which focuses on the depiction of Mexico:

"It is important for Americans to view Mexico fairly and accurately, as a country both wealthy and unequal, facing enormous social and political challenges, but also a complex society with a rich and diverse culture. Yet “American Dirt” is a reminder of the deep ignorance regarding Mexico and Mexicans in U.S. culture. As a scholar of Mexican culture, I witness how little Americans, even those with access to top educational opportunities, know about the country. It is often misrepresented as a violent and poor hell against which the United States is a promised land.

This stereotype forms the premise of `American Dirt.'”

The controversy continues.  A number of book events with the author have been cancelled.

I just completed the book.  The story it tells certainly is not what I understand to be the common story of migration from Mexico to the United States.  It read to me like a mystery/suspense/adventure novel, something akin to a James Patterson book (but with much longer chapters, descriptions, and introspection).  I am far from a literary critic but I found American Dirt to be engaging and interesting.  In terms of depicting the modern experience of migration through Mexico, most people in my opinion would learn more from Luis Urrea's The Devil's Highway or Sonia Nazario's Enrique's Journey.  In reading Cummins' book, I never got the sense that I was reading the work of someone who deeply understood Mexican culture, including the complex view of death among Mexicans, discrimination based on skin color in Mexican society, or the basics of a quinceanera (which is important to the opening plot).

Latino USA looks at American Dirt. https://www.latinousa.org/2020/01/29/americandirt/?fbclid=IwAR0OJib_lErVcv4XJM9lzmuwre3LwT0CWlbACHWF5If34Z7IiCmpeWWRNrQ
For this story, Maria Hinojosa spoke to four people at the heart of the American Dirt controversy: Myriam Gurba —writer and author of Mean— who wrote an explosive critique of the novel; Cisneros, who speaks publicly about the book for the first time; Luis Alberto Urrea, a Mexican-American author who has written extensively about border life; and finally, Cummins, the author of American Dirt.