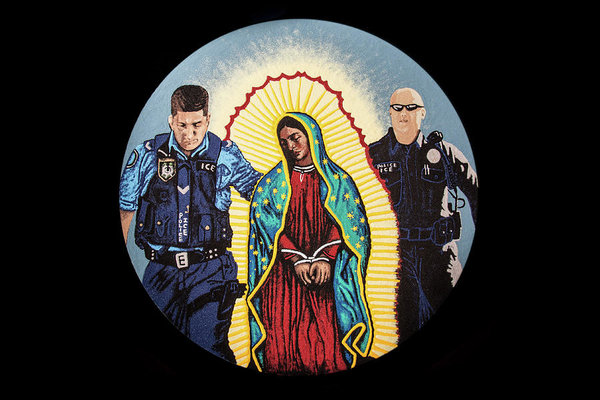 Jeff Gammage for the Philadelphia Inquirer offers some background on a piece of political art that touches on immigration.  In explaining the genesis of the art, artist Katie Jo Suddaby, also an ordained minister in the American Baptist Church, said that she had been watching the news coverage of immigration arrests:  "And in the faces of those being led away, she recognized something familiar. It was the way the migrant men and women subtly turned from the glare of TV cameras — it matched the prayerful bow depicted in traditional images of the Virgin of Guadalupe." 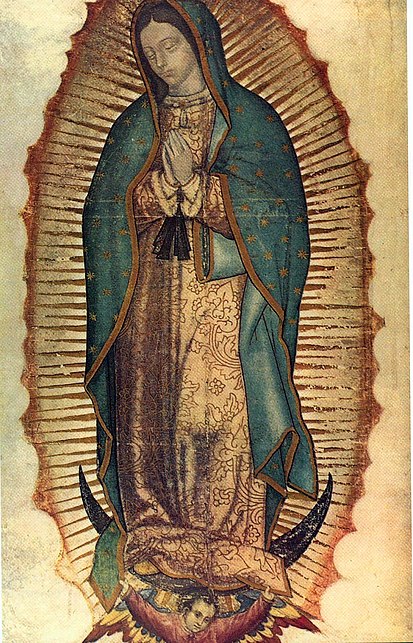 Suddaby wondered what would happen if the Virgin, perhaps the most revered and powerful religious figure in all of Mexico, suddenly appeared at the U.S. border.  "The minister, artist, and activist answered by working every day for a month to create a provocative sand painting: the sainted Virgin being taken into custody by two ICE agents, her hands not clasped in prayer, but pinned at the wrist by plastic handcuffs."

“Putting the Virgin Mother in that position, taking on the suffering of the refugees,” Suddaby said, “I wanted to say, if you look, you can see the spirit of God, the fingerprints of God, on people who have nothing and who need help.”

Gammage reports that the photo of Suddaby’s "artwork continues to bounce across the internet two years after its creation, shared and re-shared from the United States to South America. It’s been printed on banners and carried by protesters seeking to link migrant dreams to the divine at a time when the Trump administration is aggressively curtailing legal immigration and sending undocumented border-crossers out of the United States."