From the Bookshelves: Border Wars by Julie Hirschfield Davis and Michael D. Shear 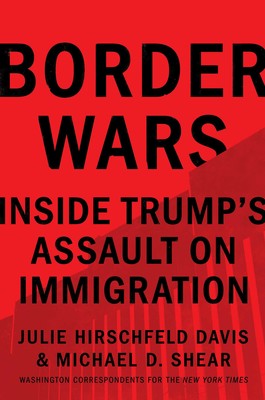 After learning from an article in The New Yorker that Acting DHS Secretary Elaine Duke provided her short memo justifying the DACA rescission because she did not support the more elaborate policy grounds pushed on her by Trump's White House advisor Stephen Miller and then-Attorney General Jeff Sessions, I wanted to learn more.

The book-length account of the episode comes from Border Wars: Inside Trump's Assault on Immigration (Simon & Schuster Press 2019).  It is gripping: 400-pages of thrilling detail about the rise and fall of DACA, TPS, border funding,  diversity visas, refugee ceilings, and policies still to be introduced. The rotating cast of characters competing for political influence over the immigration policy agenda include well-known players inside the government, plus many more players whose identities were new to me even if their quest to restrict immigration to the US is not a new idea. The behind-the-scenes accounts of each individual policy episode are bursting with details and worth a read for understanding the singular issues. The tableau created by seeing thirty+ policy episodes side-by-side and sometimes overlapping is headspinning. In this reader's view, it is a must-read for those interested in immigration policy. The authors make the case that it is also a must-read for anyone interested in understanding the political world writ large, with immigration policy serving as the "defining issue" of Donald Trump’s presidency.

Border Wars identifies the players behind Trump’s anti-immigration policies, showing how they planned, stumbled, and fought their way toward major immigration changes that have further polarized the nation. This definitive, behind-the-scenes account is filled with previously unreported stories that reveal how Trump’s decision-making is driven by gut instinct and marked by disorganization, paranoia, and a constantly feuding staff.

Julie Hirschfeld Davis is a congressional correspondent at The New York Times. She has covered politics from Washington for 21 years. She joined the Times in 2014 as a White House correspondent after stints at Bloomberg News, the Associated Press, The Baltimore Sun, and Congressional Quarterly. She won the 2009 Everett McKinley Dirksen Award for Distinguished Reporting of Congress.

Michael D. Shear is a White House correspondent in The New York Times Washington bureau, where he covers President Trump. A veteran political correspondent, before coming to the Times in 2010, he spent eighteen years writing about local, state and national politics at The Washington Post, where he was also part of the Pulitzer Prize-winning team that covered the Virginia Tech shootings in 2007.