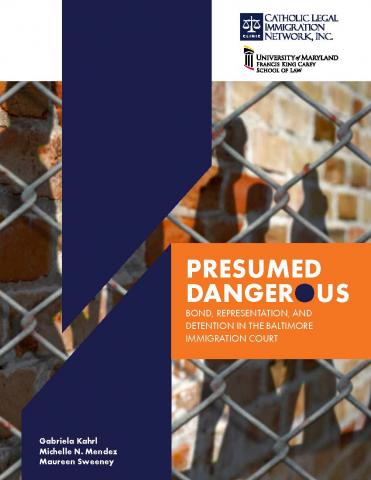 In January 2017, the University of Maryland Carey School of Law Immigration Clinic, Maryland Immigrant Rights Coalition’s, or MIRC, and CLINIC commenced a bond observation project at the Baltimore Immigration Court with the goal of learning if and how immigration judge practices and decisions evolved under the Trump Administration. This report represents a localized, quantitative perspective on those changes and includes analysis of the first set of these observations, collected from Jan. 24, 2017, to Aug. 21, 2017. The report also includes recommendations to the Department of Justice Executive Office for Immigration Review. These recommendations aim to ensure proper training of immigration judges, uphold due process during bond hearings, allow noncitizens facing gang allegations a reasonable opportunity to examine the evidence against them, establish transparency on bond amounts, and improve the appeal process.

The findings of this report include the following conclusions:

• In the six months following President Trump’s inauguration, the average bond amount increased by 38% rising from an average of $8,597 in the first three months of the observations to $11,868 in the last two months; the data also reveal that the average rate of granting bond dropped by 7% from bond granted in 73% of cases to bond granted in 66% of cases.2

• Legal representation increased the likelihood of a lower bond and reduced by almost half the chances that the judge would deny bond altogether. The immigration court set a bond in 68% of cases. Represented people were granted a bond by the immigration court or obtained a reduction in the original bond set in 72% of cases.  Unrepresented people were less likely to prevail. Only 48% of those cases received bond or reduction in bond.

• The immigration court denied bond in 32% of cases. 70% of the denied bonds were in cases in which the judge had discretion to set or deny bond. The remaining 30% were on mandatory detention grounds.

• Any allegation of gang membership or affiliation precipitously reduced the odds that the court would set any bond whatsoever; the court denied bond for 7 out of 8 people, or 88%, of the cases where the government alleged gang affiliation.

• The top countries of origin for detained people seeking bond were El Salvador (33% of recorded cases), Mexico (19%), Guatemala (15%), and Honduras (15%); with Spanish being the preferred language in most cases (82%).

• Nearly half of people had some potential form of immigration relief or protection identified, including humanitarian and family-based forms of relief.