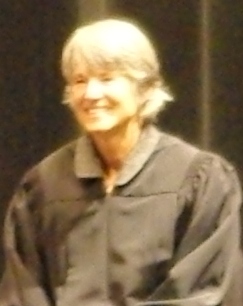 News from Oregon.  Under a new rule issued by the Oregon Supreme Court, U.S. Immigration and Customs Enforcement officers are forbidden from making arrests inside or in the close vicinity of Oregon’s state courthouses unless the agents first receive warrants from a judge.

The press release from the Oregon Supreme Court:

On the recommendation of the Uniform Trial Court Rules (UTCR) Committee, Oregon Supreme Court Chief Justice Martha Walters today enacted a rule that prohibits civil arrests in state courthouses unless the arresting agency has a judicial arrest warrant.  The rule was adopted following a request to prohibit U.S. Immigration and Customs Enforcement (ICE) agents from making arrests in courthouses acting only on their own administrative warrants.

“Adopting this rule protects the integrity of the state judicial process and will allow state courts to fully hold accountable people accused of a crime,” Walters said.  “Arrests in courthouses have interfered with judicial proceedings and removed criminal defendants before they have been sentenced or completed their sentences.  We are adopting this rule to maintain the integrity of our courts and provide access to justice– not to advance or oppose any political or policy agenda.”

The UTCR Committee reviewed a proposal to ban civil arrests without a judicial warrant both in courthouses and when people are in transit to or from court proceedings.  The final rule reflects the Committee’s recommendation and prohibits non-judicial arrests only in court facilities or their vicinity (including entryways, sidewalks, and parking lots).

The rule does not require judges to take any specific enforcement action, but also does not limit their ability to enforce this rule or other law.  The rule will be posted for public comment in midDecember and reviewed again by the UTCR Committee in April 2020.  Once posted, people wishing to comment on the rule can do so here: https://www.courts.oregon.gov/programs/utcr/committee/Pages/default.aspx.

Walters said she will continue working with federal law enforcement agencies.  Walters and the Chief Justice of the Washington Supreme Court met with ICE representatives and the United States Attorneys for Oregon and Washington on October 8 to discuss the reasons for arrests in courthouses and potential court rules in Oregon and Washington.

ICE previously declined Oregon’s request to add courthouses to its list of “sensitive locations” – such as schools, hospitals, and places of worship -- where arrests require higher-level supervisory permission or exigent circumstances."

In 2017, California Supreme Court Chief Justice Tani Cantil-Sakauye in a letter to the Attorney General and Secretary of the Department of Homeland Security registered concern with ICE arrests at California courts.