Hard to Call the Outcome in Barr v. Barton 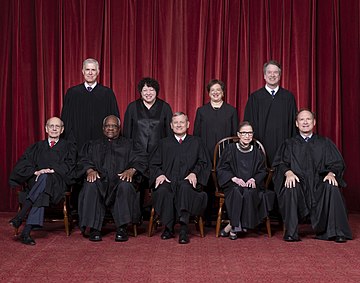 At oral arguments yesterday in Barr v. Barton, the Supreme Court grappled with the interpretation of an opaque -- I am being generous here -- provision of the immigration statute.  Jayesh Rathod outlines the issues in this post on SCOTUSblog.  Here is the transcript to the argument yesterday.  The audio is available here.

Andrew Chung for Reuters describes the case as follows:

"U.S. Supreme Court justices considered on Monday whether to make it easier for federal authorities to deport certain immigrants who have committed crimes, a population targeted by President Donald Trump’s administration.

The nine justices during an hour of arguments appeared divided over the fate of Andre Martello Barton, a legal permanent U.S. resident from Jamaica who challenged his planned deportation for drug and gun convictions in Georgia dating back to 1996.

Barton appealed a lower court ruling that the 41-year-old father of four was ineligible to have his deportation canceled under a law that lets some longtime legal residents avoid removal for certain crimes. The court’s liberal justices seemed sympathetic toward Barton. Some conservative justices appeared inclined to agree with the government’s bid to deport him." (emphasis added).

Ephrat Livni for Quartz describes the issue of statutory interpretation before the Court as follows:   "The term is 'renders inadmissible' and, based on the debate in the courtroom, it’s actually nearly incomprehensible. How the two words are interpreted will affect whether some lawful permanent residents, also known as green card holders, are eligible for cancellation of removal." Justice Stephen Breyer said at oral argument: "This statute is as obscure as any I've seen. It wasn't a genius who drafted this."

According to Livni, "arguments seemed to yield little illumination [about the meaning of the statutory text]. Each side has a simple claim. But the statute in question is so complicated that agreeing on how to read it seems impossible."

This seems like it will be another immigration case in which the Supreme Court in an opinion will deal with the technicalities of statutory interpretation.  Unlike the DACA and border shooting cases to be argued next week (as well the federal preemption case (Kansas v. Garcia)). the opinion in Barr v. Barton is likely to be be narrow in scope.

"At the end of the hour, Barton’s fate remained unclear. Breyer, Kagan and Sotomayor appeared to support Barton’s reading of the statute, while Alito and Kavanaugh seemed inclined toward the broader interpretation advanced by the government. With only brief interventions from Ginsburg and Roberts – and silence from Justices Neil Gorsuch and Clarence Thomas – the status of the remaining votes is uncertain. If the justices split on broader questions of congressional intent, consensus may ultimately emerge around the cleanest, most logical reading of the statute."