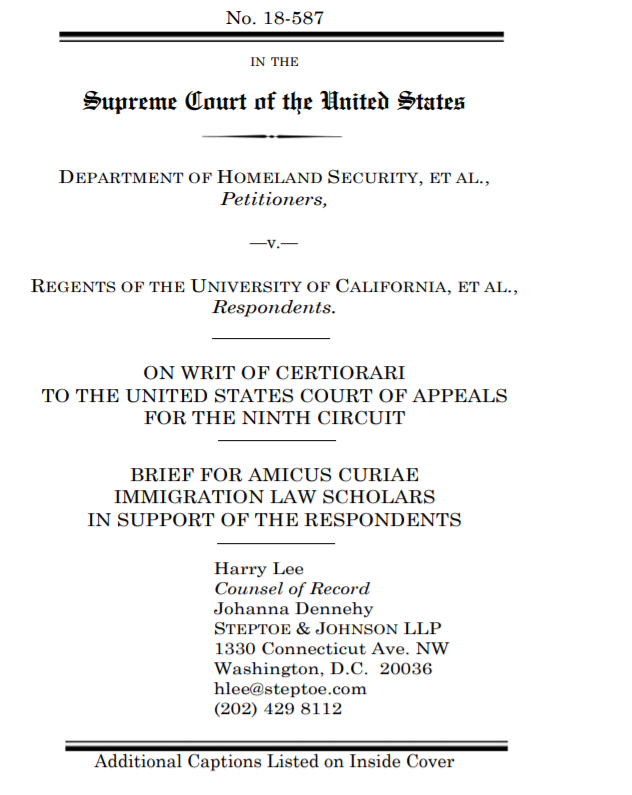 More than one hundred immigration law professors filed their amicus brief defending DACA in the Supreme Court. Thanks for the leadership of Shoba Wadhia, Michael Olivas, and ImmigrationProf blogger Kevin Johnson and the assitance of Steptoe and Johnson. Oral argument proceeds Tuesday, November 12, 2019.

‘Amici are 124 scholars of immigration law who have testified, lectured, researched, written, and advocated at length on immigration issues, including the principal subject of this appeal: The power of the Executive Branch to craft and deploy immigration-related deferred action policies. This brief reflects amici’s long-standing interest in and knowledge regarding the historical use of deferred-action initiatives in immigration enforcement, as well as the legal doctrines and precedent supporting such use.

While the parties debate in their briefs DHS’s ability to rely on post-hoc rationalizations for agency decisions, amici respectfully submit this brief for the purpose of demonstrating to the Court that DHS’s originally stated basis for rescission — the purported unconstitutionality and/or illegality of DACA — is not supported by legal precedent or historical practice. Amici can state this conclusion with confidence because they have devoted their careers to studying and researching immigration law, including the means by which the Executive Branch has exercised its discretion to identify which cases present a high priority for removal, and which low-priority immigrants may appropriately be placed at the ‘end of the line.’

By submitting this brief, amici seek to provide the Court with the benefit of their expertise and knowledge regarding the long-standing use of deferred action and other forms of prosecutorial discretion in immigration enforcement.’

SCOTUSBlog has all of the briefs filed in the case at https://www.scotusblog.com/case-files/cases/department-of-homeland-security-v-regents-of-the-university-of-california/