Liz Goodwin for the Boston Globe tells an interesting political story about Iraqi Christians in Michigan, which Donald Trump won by an extremely small margin in the 2016 election.  The close-knit Iraqi Christian community in southeastern Michigan is divided on President Trump, which could affect the 2020 presidential election in this crucial Midwestern state.

Trump captured the votes of many Iraqi Christians with his antiabortion stance, promise to protect Christian minorities in the Middle East, and commitment to crush ISIS. When Trump denigrated other immigrant groups,  some Iraqi Christians — who are also called Chaldeans, after the name of their branch of the Catholic Church — saw no threat to their community whose members largely entered the country legally. 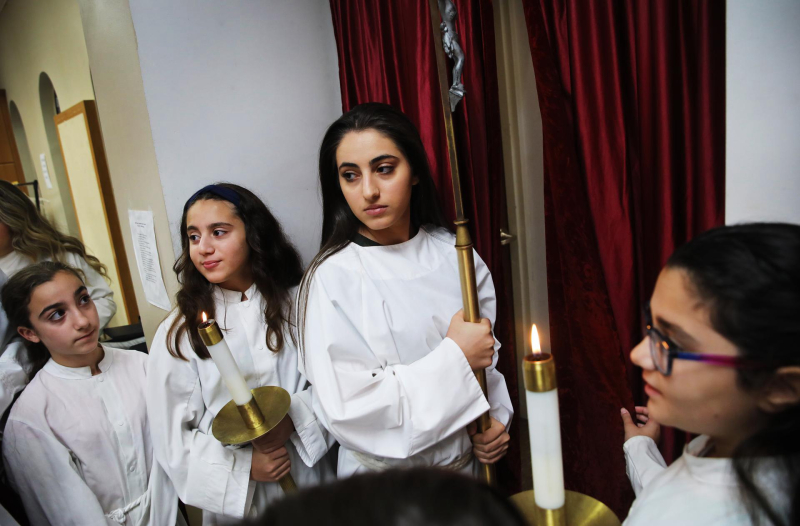 Altar servers waited before a service at St. Joseph Chaldean Catholic Church on a Sunday morning in the largely Chaldean neighborhood of Sterling Heights. Erin Clark for the Boston Globe

Influential Iraqi Christian figures supported Trump. A Chaldean priest was photographed giving a blessing to Trump in a brief meeting before the election in an image that was shared widely on Facebook. Other Chaldeans attended Trump rallies holding signs of support.

“There’s a very good chance he won Michigan because of our community,” said Nahren Anweya, an Iraqi-American Christian activist from southeast Michigan who backed Trump. “We did trust President Trump to protect us.”

The image of Trump as protector was shaken early in his presidency. Just days after he took office, Trump banned the admission of persons from several majority-Muslim nations, which initially included Iraq. Soon after, ICE agents rounded up Iraqis across the US. Most were legal immigrants but had committed crimes, often decades ago, making them eligible to be deported to a country where they feared death or torture.

Iraqi Christians began arriving in Detroit in the early 1900s. More Iraqi Christians arrived in the 1990s in the aftermath of the Gulf War, and settled in Detroit about a mile from “Chaldean Town” — an Iraqi Christian community filled with churches, bakeries, and shops that closely replicated life in the Northern Iraqi villages.