A federal court in New York today issued a national injunction to stop the DHS' new public charge rule from going into effect on October 15. Titled Inadmissibility on Public Charge Grounds, the rule would deny legal residency to immigrants who are likely to depend on public welfare, including cash assistance, food stamps, and housing assistance. Though public charge has been part of the immigration statute for years, the “public charge” regulation set new standards for determining who might become a public burden by expanding the preexisting definition.

Judge George B. Daniels of the United States District Court in the Southern District of New York said those potentially affected by the new regulation could suffer “irreparable harm” if it goes into effect. “The balance of equities and the interests of justice favor issuance of a preliminary injunction,” the judge wrote.

Immigration advocates and state attorneys general had condemned the rule, filing 260,000 comments in opposition prior to its publication and 8 lawsuits. The Justice Department is likely to appeal.

This rule is separate from President Trump's proclamation  to deny immigrant visas to those who cannot prove that they will either have health insurance or can afford to pay for their own health care, which was issued one week ago on October 4. 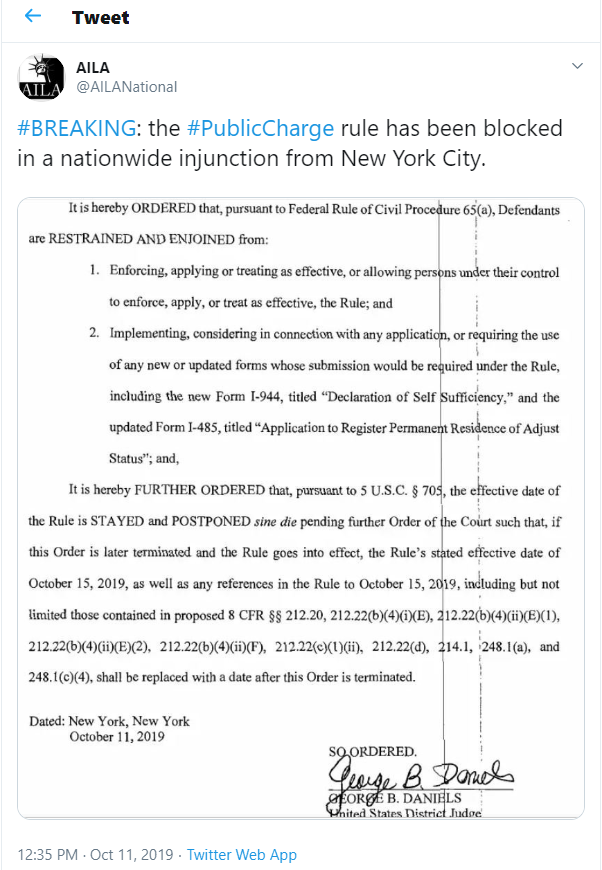