From the Bookshelves: Separated: Family and Community in the Aftermath of an Immigration Raid by William D. Lopez 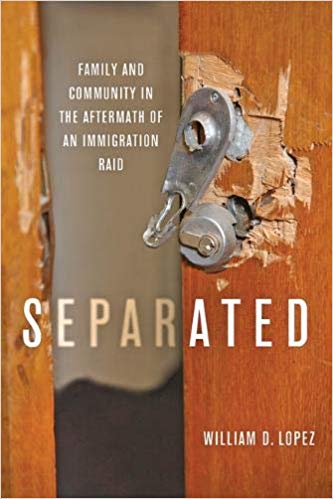 Separated: Family and Community in the Aftermath of an Immigration Raid by William D. Lopez

On a Thursday in November of 2013, Guadalupe Morales waited anxiously with her sister-in-law and their four small children. Every Latino man who drove away from their shared apartment above a small auto repair shop that day had failed to return―arrested, one by one, by ICE agents and local police. As the two women discussed what to do next, a SWAT team clad in body armor and carrying assault rifles stormed the room. As Guadalupe remembers it, "The soldiers came in the house. They knocked down doors. They threw gas. They had guns. We were two women with small children... The kids terrified, the kids screaming."

In Separated, William D. Lopez examines the lasting damage done by this daylong act of collaborative immigration enforcement in Washtenaw County, Michigan. Exploring the chaos of enforcement through the lens of community health, Lopez discusses deportation's rippling negative effects on families, communities, and individuals. Focusing on those left behind, Lopez reveals their efforts to cope with trauma, avoid homelessness, handle worsening health, and keep their families together as they attempt to deal with a deportation machine that is militarized, traumatic, implicitly racist, and profoundly violent.

Lopez uses this single home raid to show what immigration law enforcement looks like from the perspective of the people who actually experience it. Drawing on in-depth interviews with twenty-four individuals whose lives were changed that day in 2013, as well as field notes, records obtained under the Freedom of Information Act, and his own experience as an activist, Lopez combines rigorous research with narrative storytelling. Putting faces and names to the numbers behind deportation statistics, Separated urges readers to move beyond sound bites and consider the human experience of mixed-status communities in the small everyday towns that dot the interior of the United States.