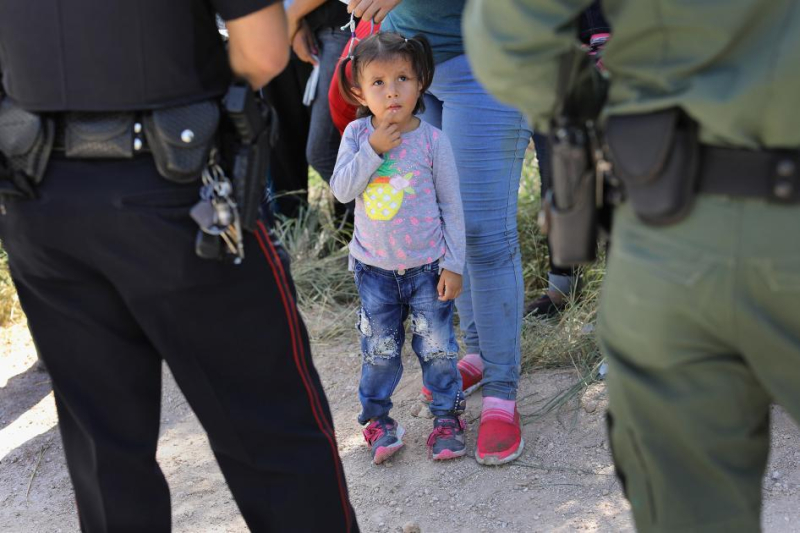 A Mission Police Dept. officer (L), and a U.S. Border Patrol agent watch over a group of Central American asylum seekers before taking them into custody on June 12, 2018 near McAllen, Texas. © 2018 Getty Images

It was a busy day in the federal courts yesterday, with several major (here and here) immigration decisions.  Human Rights Watch released this important update on the Trump administration's efforts to abrogate the Flores settlement that since the late 1990s has governed the detention of migrant children:

"A federal judge’s ruling on September 27, 2019, to block the Trump administration’s new rules allowing indefinite detention of children with their parents is a victory for the rights of migrant children, Human Rights Watch said today.

“The Trump administration’s new rules were completely inconsistent with legal requirements designed to protect children from the severe harm and trauma of detention,” said Clara Long, acting deputy Washington director at Human Rights Watch. “The decision sends a clear signal to the administration that child protection should be one of the central goals of US immigration policy.”

Judge Dolly Gee of the United States District Court for the Central District of California ruled that these regulations are inconsistent with the Flores settlement agreement, signed by the government in 1997 to resolve a lawsuit brought in 1985 challenging the US government’s detention of migrant children. Human Rights Watch submitted a friend-of-the-court brief to Judge Gee setting out relevant human rights standards and supporting lawyers for detained children who challenged the regulations.

A core principle and requirement for migrant children taken into detention under the Flores agreement is that they should be released as “expeditiously” as possible. The Trump administration’s regulations provide instead for the indefinite detention of children with their parents in federal immigration facilities pending resolution of their immigration proceedings. The regulations attempt to end court oversight of immigration detention of children, including a court order that children must not be held for more than 20 days in facilities not licensed for childcare. The regulations also eliminate the requirement that facilities holding children must be licensed by states.

Judge Gee’s decision states that the US government has not fulfilled its obligations under the agreement, finding, “The New Regulations’ deficiencies and other ongoing litigation in this case, more than 20 years after the Agreement was executed, evidence [the US government’s] lack of substantial compliance.”

Human Rights Watch and others have documented ongoing failures to adequately protect the rights of migrant children. Human Rights Watch research in 2014 and 2015 found that members of families held for prolonged periods suffered trauma, depression, and suicidal thoughts. Other studies of detained immigrant children have also found high rates of post-traumatic stress disorder, depression, and anxiety, and psychologists agree that “even brief detention can cause psychological trauma and induce long-term mental health risks for children."

Human Rights Watch submitted comments on the Flores regulation when the new regulations were proposed last fall, recommending that the administration should withdraw the rules and instead dedicate their efforts to advancing policies that safeguard the health, safety, and best interests of children and their families, not least through robust, good-faith compliance with the Flores Settlement Agreement.

On September 24, the administration announced that it would send families seeking asylum to Mexico under the Migrant Protection Protocols, rather than releasing them while their cases are pending. The program has already resulted in tens of thousands of asylum seekers being sent to Mexico, where they experience severe shortages of shelter, serious barriers to due process, and threats of kidnapping, extortion, and other violence.

The government claims that regulations allowing indefinite family detention and barriers to asylum are needed because asylum-seeking families do not appear for immigration court proceedings. But a pilot detention alternative program in which families and unaccompanied children had legal representation resulted in a 98 percent rate of appearance in court.

“In this ruling, the judiciary has blocked one of the administration’s many unrelenting attacks on asylum, but the US government should do much more to protect the rights of child migrants and asylum seekers,” Long said. “Congress should ensure that children and families in need of protection are able to get fair hearings, in keeping with American and international human rights values.”"

Kristina Cooke for Reuters offered this report on the latest order in the Flores litigation.  Brittny Mejia and Joel Rubin for the Los Angeles Times look at the Trump administration's three legal setbacks on the same day.