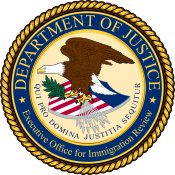 In a Marshall Project piece ("Border Courts Swamped With New Asylum Cases: Thousands of cases have been filed since President Trump started forcing asylum seekers to wait in Mexico."), Andrew R. Calderón reports that , early this year, the Trump administration began forcing thousands of migrants seeking asylum to return to Mexico, to wait for removal hearings in immigration court. According to new government figures, the policy is flooding the courts. The numbers from the Executive Office for Immigration Review, the agency within the Department of Justice that runs the immigration court system, show that so far this year, nearly 17,000 new asylum cases for migrants waiting in Mexico have been assigned to border courts through the end of August. And the numbers have been growing. More than 6,000 were filed in August alone.