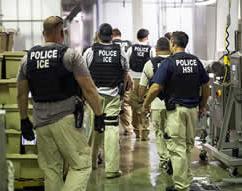 Yesterday, Immigration and Customs Enforcement (ICE) conducted raids in Mississippi.  CNN reported that "It was the first day of school in Morton, Mississippi, Wednesday, and many undocumented parents and their children went together to the first morning drop off, said Elizabeth Iraheta. By the end of the day, some of those children were all alone, she said. . . . . US immigration authorities arrested about 680 undocumented immigrants at seven sites in six different cities in Mississippi on Wednesday. The raids are `believed to be the largest single-state immigration enforcement operation in our nation's history,' said US Attorney for the Southern District of Mississippi Mike Hurst.  Officials declined to provide details about what sites had been targeted, citing what they said was an ongoing criminal investigation. CNN affiliates reported the raids occurred at food processing plants throughout the state."

HAPPENING NOW: In Forrest, Mississippi where one of the #ICE raids happened nearby Children of those who were arrested are left alone in the streets crying for help. Strangers and neighbors are taking them to a local gym to be put up for the night. FULL STORY TONIGHT ON @WJTV. pic.twitter.com/s2zuTTRYfM

Here is the ICE press statement on the raids:

In addition to executing federal search warrants and seizing business records pertaining to the ongoing federal criminal investigation, deportation officers with ICE Enforcement and Removal Operations (ERO) in partnership with HSI detained approximately 680 removable aliens who were unlawfully working at the plants.

All the unlawfully present foreign nationals arrested Wednesday are being interviewed by ICE staff to record any potential mitigating humanitarian situations. Based on these interviews, and consideration of their criminality and prior immigration history, ICE is determining on a case-by-case basis based on the totality of the circumstances which individuals will be detained and which persons may be released from custody at present. In all cases, all the illegal aliens encountered as part of this operation are either being placed into removal proceedings before the federal immigration courts, and for those who already received due process and have been ordered removed, processed for removal from the U.S.

A 24-hour toll-free hotline is available for family members of those arrested in this operation to address questions about their detention location and status, and the removal process. This hotline operates in English and Spanish; the phone number is 1-855-479-0502.

This HSI-led operation was conducted in coordination with the U.S. Attorney’s Office for the Southern District of Mississippi, of which U.S. Attorney D. Michael Hurst Jr. will prosecute any resulting federal criminal charges.

HSI is the federal law enforcement agency responsible for upholding the laws established by the 1986 Immigration Reform and Control Act (IRCA), which requires employers to verify the identity and work eligibility of individuals they hire. These laws help protect jobs for U.S. citizens and lawful U.S. residents, eliminate unfair competitive advantages for companies that unlawfully hire an illegal workforce, and strengthen public safety and national security.

Unauthorized workers often use stolen identities of legal U.S. workers, which can profoundly damage for years the identity-theft victim’s credit, medical records and other aspects of their everyday life.

In addition to worksite enforcement operations like this one, HSI also uses I-9 audits to create a culture of compliance among employers. In July 2018, ICE announced a two-phase operation under this effort."

“Today’s raids are part of the ongoing war against immigrant families and the communities in which they live. These sorts of raids terrorize workers and their families. What’s more, today’s raids needlessly ripped parents from their children during the first week of school.

“It is especially sickening that days after immigrants were targeted by a gunman in El Paso, Texas, workers at plants across Mississippi witnessed armed agents descending on their workplace.

“It’s also worth noting that immigration agencies that have repeatedly blamed ‘over capacity’ detention facilities for the horrific treatment of those imprisoned nevertheless detained more than 600 people today.

“Our attorneys and advocates are closely monitoring the situation and exploring options to assist those impacted.”

UPDATE (Aug. 9): ABC News reports that several hundred individuals arrested during an immigration roundup across Mississippi earlier this week, leaving children without parents in some cases, have been released, a U.S. Immigration and Customs Enforcement spokesman said.   Young children were seen crying on local news video about being separated from their mothers and fathers.  Children of adults detained in the raids were taken to local elementary schools until they could be reunited with extended family members.  ICE Southern Region Communications Director Bryan Cox defended the agency's handling of the matter, saying as arrests were made, those detained were allowed to make arrangements to have their children picked up and that schools were notified.  Immigration advocates condemned the raids, and focused on the children of those set to be deported.

It reportedly was the first day of school.  Critics claimed that ICE had not planned for addressing the impacts of the raids on children whose parents were arrested.

In 2007, then-Massachusetts Governor Deval Patrick protested the impacts of a workplace raid in New Bedford, Massachusetts because of the arrest and detention of parents, forcing them to abandon their children.