In the immediate aftermath of the mass shootings in El Paso, Texas and Dayton, Ohio, President Trump via twitter attempted to link gun control with immigration reform. (UPDATE: A related ImmigrationProf blog post has more details.) 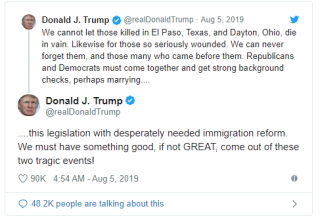 His reasons for linking these two policy issues, both of which have proved politically intractable, was convoluted and it is unclear whether he will urge that the tweets be turned into a legislative strategy. One possibility is that he sees gun control as a way to protect immigrants who were the explicit target of the El Paso attacks (the gunman issued anti-Hispanic manifesto prior to shooting) and racial minorities frequently suffer from gun violence. Analysts have pointed out that the types of gun legislation he has mentioned since the attacks would not have helped: background checks may not have prevented the El Paso and Dayton shooters from obtaining high-powered weapons as neither of them had substantial criminal records... and neither would regulating video games, internet and social media, the causes he pivoted to after his initial support for gun control faltered.

Another possibility is the near reverse, that he sees immigrants as the trigger for gun violence and is subtly trying to shift and deflect blame for the recent killings by forging a false attribution between immigrants and public danger. His insinuations that immigrants pose a threat that may justify the use of force include describing migration as "invasions" (Boston Globe reports that since October 2018, Trump has used variations of “invasion” at least 33 times in speeches, tweets, and interviews), his joking acceptance of a Florida rally-goer suggesting that immigrants who cross the border be shot, references to immigrants as rapists and murderers, and repeated taunts of four congresswomen of color that prompted the chant to "send back" Rep. Ilhan Omar, who is a Somali refugee, naturalized citizen, and a person of color. These statements contrast sharply with his televised speech denouncing white supremacy and "racist hate," and he neither took responsibility nor acknowledged the possible relationship between his anti-immigrant, racially divisive comments and the amplification of the extremist views that fueled the attacks -- linkages pointed out by several Democratic candidates, most notably Rep. Beto O'Rourke of El Paso and Rep. Jerry Nadler of New York, who asked of Trump’s remarks: “What’s the connection between background checks for guns and immigration reform? That we have to keep guns out of the hands out of the invading hordes of less-than-human people coming across our borders?”

Probing Trump's mind for the linkage he sees between gun control and immigration reform may come to naught, as the New York Times reports that several aides argued that the linkage surprised them and was ultimately a mistake. Plus, the president dropped both the immigration idea and the call for background checks from his televised remarks. Yet the insinuations, which have a long history in the politics of immigrant exclusion (Mae Ngai traces the fear of a “foreign invasion” of immigrants to the late 19th century, when white panic about Chinese Americans was pervasive), will linger.

UPDATE: A third interpretation is offered for the pairing: that immigration reform would reduce white supremacy and therefore killings https://www.washingtonpost.com/outlook/2019/08/05/trump-just-blamed-el-paso-shooting-victims-their-own-deaths/