CNN: Acting Director of CIS Ken Cuccinelli has talked about undocumented immigrants as 'invaders' since at least 2007 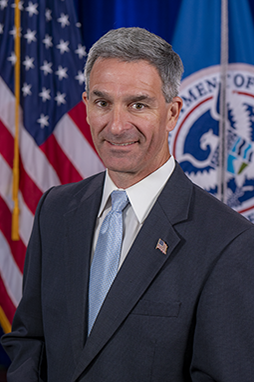 Andrew Kaczynski on CNN reports that Ken Cuccinelli, the acting director of US Citizenship and Immigration Services, was a founding member of a group more than a decade ago that described undocumented immigrants as "foreign invaders" responsible for "serious infectious diseases, drug running, gang violence, human trafficking, terrorism."  Cuccinelli has vigorously defended the Trump administration's controversial public charge rule, which is being challenged in litigation.

The group, State Legislators for Legal Immigration, was established in 2007, when an immigration revamp was being debated in Congress. According to CNN, "Its founding principle was that undocumented immigration represented an invasion of the United States on par with foreign invasion that should justify invoking war powers under the Constitution -- extreme rhetoric Cuccinelli has continued to use in recent years, and that has been adopted by President Donald Trump and other Republicans."  Here is a video on the front page of the State Legislators for Legal Immigration website:

Speaking with Breitbart radio in October of last year, Cuccinelli argued that states could use "war powers" to block Central American migrants, including many asylum seekers, from coming across the border.

"We've been being invaded for a long time, and so the border states clearly qualify here to utilize this power themselves. And what's interesting is they don't need anyone's permission," Cuccinelli said. "They can do it themselves. And because they're acting under war powers, there's no due process. They can literally just line their National Guard up with, presumably with riot gear like they would if they had a civil disturbance, and turn people back at the border. Literally, you don't have to keep them, no catch and release, no nothing. You just point them back across the river and let them swim for it."

"When someone comes across your border without your permission, it's an invasion," he added. "Their purpose here is to violate the border, to violate our sovereignty, for their own purposes. That's an invasion. And here, I don't think with the caravan it's even debatable because you've got an entire group that's organized itself to come into the country."

UPDATE (Aug. 18):  NPR interviewed Ken Cucinneli on the new public charge rule. "Give me your tired and your poor who can stand on their own two feet and who will not become a public charge," Cuccinelli said, paraphrashing -- "twisting" accoring to the NPR story -- Emma Lazarus' famous words on a bronze plaque at the Statue of Liberty.