Prosecution of Sex Trafficking of Children is Down Nationwide 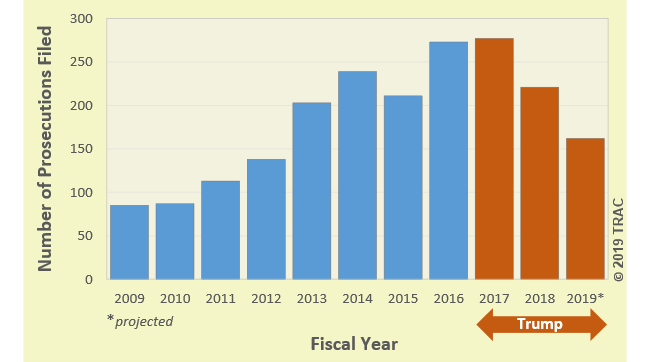 Prosecutions for sex trafficking of children under a law used against financier Jeffrey Epstein last week are down 26.7 percent over the past fiscal year, according to the latest available data from the Justice Department.

During the first eight months of FY 2019 the government reported 108 new prosecutions for sex trafficking of children under Title 18 Section 1591. This is the chief statute federal prosecutors in the Southern District of New York (Manhattan) used in the Epstein charges.

If the present pace of such prosecutions continues, the fiscal 2019 total will be 162, compared to 221 last year. According to the case-by-case records analyzed by the Transactional Records Access Clearinghouse (TRAC) at Syracuse University, this is the second year in a row such prosecutions have fallen, a reversal of the growth trend during the Obama years. (See Figure 1 above). Vertical bars represent the number of prosecutions of this type recorded each fiscal year. Projected figures for the current fiscal year are shown. Each presidential administration is distinguished by the color of the bars.)

Compared to five years ago, the estimate of FY 2019 prosecutions of this type is down 32.2 percent, from 239. However, prosecutions over the past year are still much higher than they were ten years ago, up 90.6 percent from the 85 reported in 2009. (See Table 1 above.) And overall federal prosecutions for all crimes are up significantly since 2016.