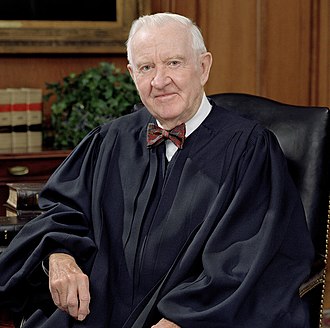 The nation mourns the passing of retired Justice John Paul Stevens at age 99.  Besides his iconic status in the development of the law in many different areas, Justice Stevens penned some important immigration opinions.

Justice Stevens wrote for the majority in INS v. Cardoza-Fonseca (1987), which held that the evidentiary burden for prevailing on an asylum claim is more generous than the burden for prevailing on a withholding of deportation claim.  Justice Stevens distinguished his administrative law decision in Chevron, refusing to defer to the agency's immigration interpretation of the immigration statute because it was inconsistent with the statute.  He concluded the opinion as follows:

"Deportation is always a harsh measure; it is all the more replete with danger when the alien makes a claim that he or she will be subject to death or persecution if forced to return to  his or her home country. In enacting the Refugee Act of 1980 Congress sought to `give the United States sufficient flexibility to respond to situations involving political or religious dissidents and detainees throughout the world.' . . . Our holding today increases that flexibility by rejecting the Government's contention that the Attorney General may not even consider granting asylum to one who  fails to satisfy the strict [withholding of removal] standard. Whether or not a `refugee' is eventually granted asylum is a matter which Congress has left for the Attorney General to decide. But it is clear that Congress did not intend to restrict eligibility for that relief to those who could prove that it is more likely than not that they will be persecuted if deported."

In one of his last opinions before retirement, Justice Stevens wrote for a majority of the Court in the blockbuster crimmigration case of Padilla v. Kentucky (2010). In that case, the Court held that the Sixth Amendment requires counsel to inform a noncitizen client that a plea may carry immigration consequences, including removal.  The holding in Padilla has had a dramatic impact on criminal removals that were ramped up under President Obama and later President Trump.  Justice Stevens noted the human impacts of removal:

"We have long recognized that deportation is a particularly severe `penalty,' Fong Yue Ting v. United States, 149 U.S. 698, 740 (1893); but it is not, in a strict sense, a criminal sanction. Although removal proceedings are civil in nature, see INS v. Lopez-Mendoza, 468 U.S. 1032, 1038 (1984), deportation is nevertheless intimately related to the criminal process. Our law has enmeshed criminal convictions and the penalty of deportation or nearly a century, . . . . And, importantly, recent changes in our immigration law have made removal nearly an automatic result for a broad class of noncitizen offenders. Thus, we find it `most difficult' to divorce the penalty from the conviction in the deportation context. . . . Moreover, we are quite confident that noncitizen defendants facing a risk of deportation for a particular offense find it even more difficult. See St. Cyr, 533 U.S., at 322 (`There can be little doubt that, as a general matter, alien defendants considering whether to enter into a plea agreement are acutely aware of the immigration consequences of their convictions')."

In INS v. Elias-Zacarias (1992), Justice Stevens delivered a heated dissent to the majority's interpretation of the requirement of a nexus between political opinion and feared persecution necessary for asylum.  He warned against construing "political opinion" in a manner that limits the benefits of our immigration laws to those who adhere to a political extreme.  In addressing the majority's refusal to recognize Elias-Zacarias's case as establishing the requisite fear of persecution, Justice Stevens pointed out that, "Guerillas do not inquire into the reasoning process of those who insist on remaining neutral and refuse to join their cause. They are only concerned with an act that constitutes an overt manifestation of a political opinion."  Elias-Zacarias was denied asylum in the United States.