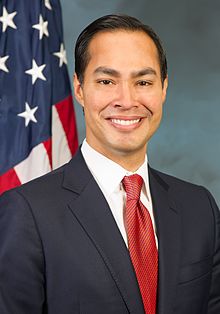 Rebekah Entralgo on Think Progress reports that Congress member and Democratic Presidential candidate Joaquin Castro (D) has  introduced legislation that would remove "aliens" and "illegal aliens" from the Immigration and Nationality Act.  Here is his office's press release.

The Correcting Alienating Names in Government Act, or CHANGE Act, would eliminate the words “alien” and “illegal alien” from the Immigration and Nationality Act — the nation’s governing federal immigration law — and other government texts. The terms “foreign national” and “undocumented foreign national” would be used respectively in their place.  Castro introduced a similar bill in 2015.

“Words matter,” Castro said in a statement. “It’s vital that we respect the dignity of immigrants fleeing violence and prosecution in our language. The words ‘alien’ and ‘illegal alien’ work to demonize and dehumanize the migrant community. They should have no place in our government’s description of human beings.”

Although not defined in the Immigration & Nationality Act, the emotion-laden phrase “illegal aliens” often is employed in the public debate over immigration. See Mae M. Ngal, Impossible Subjects: Illegal Aliens and The Making of Modern America (2004). Because the lawfulness of the status of some undocumented immigrants is not always clear, characterizing them as “illegal” is not entirely accurate. Restrictionists frequently decry “illegal aliens” and advocate their mass deportation from the United States. The use of the very term “illegal aliens” ordinarily betrays a restrictionist bias in the speaker.  Similarly, the term “alien,” although literally the DNA of the INA which addresses in general terms the treatment of “aliens,” as opposed to citizens, has negative connotations. See Kevin R. Johnson, “Aliens” and the U.S. Immigration Laws: The Social and Legal Construction of Nonpersons, 28 U. Miami Inter-Am. L. Rev. 263 (1996-97); D. Carolina Nuñez, War of the Words: Aliens, Immigrants, Citizens, and the Language of Exclusion, 2013 BYU L. Rev. 1517.