From the Bookshelves: Technologies of Suspicion and the Ethics of Obligation in Political Asylum by Bridget M. Haas (Editor), Amy Shuman (Editor) 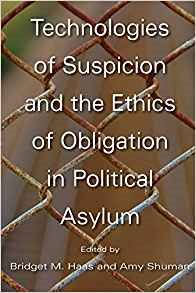 Technologies of Suspicion and the Ethics of Obligation in Political Asylum (Series in Human Security) by Bridget M. Haas (Editor), Amy Shuman (Editor) (2019)

Across the globe, migration has been met with intensifying modes of criminalization and securitization, and claims for political asylum are increasingly met with suspicion. Asylum seekers have become the focus of global debates surrounding humanitarian obligations, on the one hand, and concerns surrounding national security and border control, on the other. In Technologies of Suspicion and the Ethics of Obligation in Political Asylum, contributors provide fine-tuned analyses of political asylum systems and the adjudication of asylum claims across a range of sociocultural and geopolitical contexts.

The contributors to this timely volume, drawing on a variety of theoretical perspectives, offer critical insights into the processes by which tensions between humanitarianism and security are negotiated at the local level, often with negative consequences for asylum seekers. By investigating how a politics of suspicion within asylum systems is enacted in everyday practices and interactions, the authors illustrate how asylum seekers are often produced as suspicious subjects by the very systems to which they appeal for protection.