Once Undocumented, then a lawyer, Sergio Garcia now a U.S. Citizen 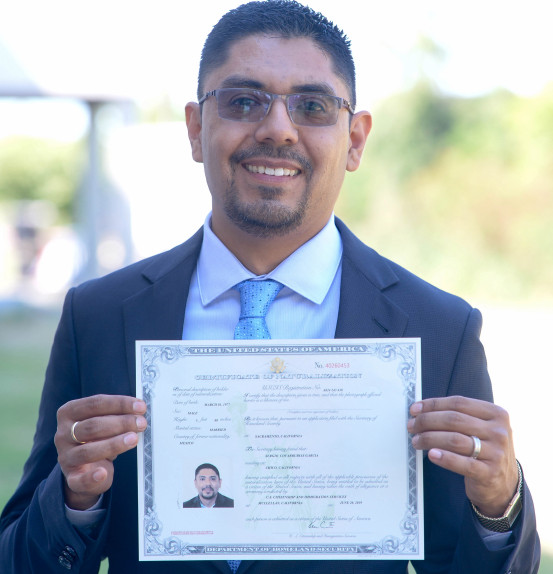 Once undocumented and later a lawful permanent resident, Sergio Garcia, who practices at his law offices in rural Chico, California, became a naturalized U.S. citizen this week in a ceremony in Sacramento.

It has been a long road to citizenship for Garcia.  He finally became a lawful permanent resident in 2015. Garcia first came to the United States as a child in 1994.  Undocumented when he first came, Garcia applied for a visa in 1994 and spent about 20 years waiting “in line” for his "green card." (The delay was the result of "per country" ceilings in the immigration laws that make waits for certain visas very long for citizens of Mexico.).  Meanwhile, he earned a degree from California State University, Chico and studied at California Northern School of Law. When he passed the bar exam on the first attempt, the California Supreme Court found that Garcia, although an undocumented immigrant, was eligible for a bar license.

Garcia was admitted to the California State Bar in 2014.  He then opened a law office in Chico.  And now is a U.S. citizen.

My name is Irving Valdovinos Alvarez and I’m an undocumented CSUF graduate and aspiring attorney from Anaheim, California. I read all about your courage’s fight and the challenges you faced on your path to becoming the first undocumented person admitted to the California Bar. I want to congratulate you and thank you for being an inspiration to those, like me, who can relate so much to your story and dream of becoming lawyers. You’re a modern-day pioneer and a hero for all immigrants. Thank you so much for paving the way and opening a door for all of us. Your fight and struggles changed the world! So, it is a pleasure to know that after 25-years of waiting you recently become a naturalized U.S. citizen. Congratulation!

My apologies for all the questions I just don’t have any other undocumented attorney role models who I can reach out to for this kind of information. Hope you can help and thank you in advance for your time and consideration of my questions.