Ghosts of Gold Mountain: On the Chinese Immigrants Who Changed America and How the Nation (Unfortunately) Punished Them 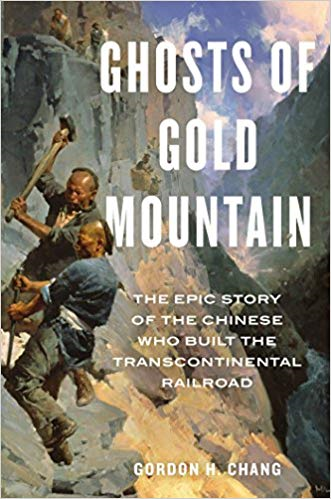 I strongly recommend the book Ghosts of Gold Mountain: The Epic Story of the Chinese Who Built the Transcontinental Railroad by Gordon H. Chang.  It previously was previewed on the ImmigrationProf blog.  I just finished reading this very readable book and found it to offer an incredibly important account of the Chinese immigrants who literally built the western end of the transcontinental railroad and forever changed the United States, revolutionizing commerce in the country and literally transforming the nation.

Chang offers a human account of the role of Chinese immigrants, who often have been rendered invisible in the history books, in the construction of the U.S. transcontinental railroad, which was completed in 1869.  He refers to the workers as "Railroad Chinese," most who hailed from southern China and performed the amazing feat of completing the transcontinental railroad through the incredibly rocky and steep Sierra Nevada mountains.  Ghosts of Gold Mountain tells us how the workers (almost all men but with a small group of women who, according to Chang, mostly worked in prostitution) lived (including what they ate and drank) in the United States (far from family and friends in China), how they were skilled railroad builders, resisted unfair treatment by their employers, and ultimately how the nation discarded them after their labor was no longer needed.  California railroad barons Leland Stanford and Charles and Edwin Crocker feature prominently in the story of the Railroad Chinese and the construction of the transcontinental railroad.  Although many initially opposed the use of Chinese labor in railroad construction, the workers proved themselves to be diligent, responsible, and dependable.

Despite their daring achievements, the Chinese workers in the late 1800s were subject to discrimination, the Chinese exclusion laws designed to end immigration from China, and political movements led by white workers and others for their removal.  In my opinion, an understanding of how the nation treated Chinese immigrants is necessary to an understanding of the exclusion laws, which continue to influence -- through the "plenary power doctrine" and more -- immigration law and policy.

Like any good book, Ghosts of Gold Mountain got me thinking.  I did a little research after reading about the Chinese workers who settled in Truckee, California, a small town near Donner Lake, known for the ill-fated Donner Party. Not far from Truckee, the Railroad Chinese constructed a series of tunnels through granite at high altitudes, including during the harshest of winters.  Many Railroad Chinese died.  Today, Truckee, where I have vacationed for years, has almost no evidence of the Chinese settlement that was so prominent from 1840-1886.  Chinese people were basically forced to leave Truckee.  The efforts culminated in 1886; discrimination, boycotts of their businesses and labor, and violence, which later became known as the "Truckee method," basically forced the Chinese to leave the city.  In one spectacular case, a group of white defendants were acquitted of the killing of a Chinese man in 1876 in a raid on a house with Chinese workers known as the "Trout Creek Outrage."  During the same general time period, a secret white supremacist society known as the "Caucasian League" had hundreds of members in Truckee and thousands throughout the state.  At various times in the late 1800s, suspicious fires destroyed parts of the "Chinatown" section of Truckee.

In 1886, California held the Anti-Chinese Nonpartisan Convention in San Jose, which praised the intimidation fires, boycott, and exclusion —the Truckee Method — and adopted it across the state.  The Truckee method was successful because it was said to be “lawful and nonviolent.”