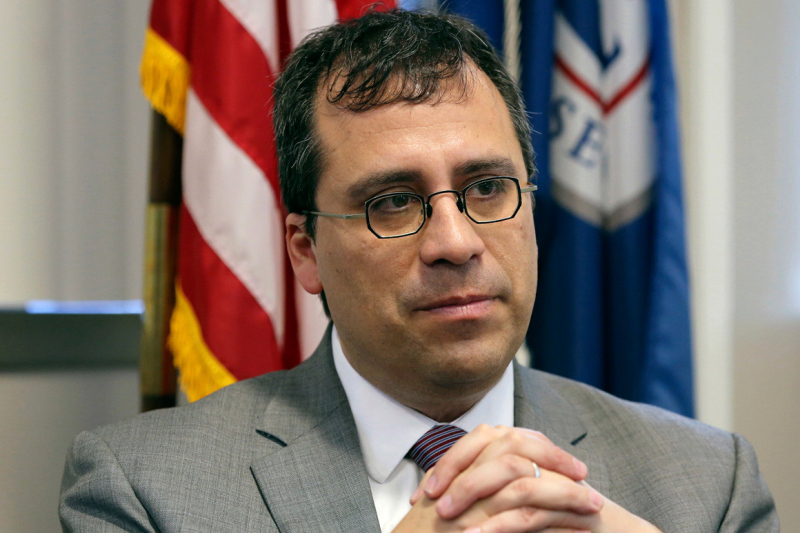 The Hill reports that the head of U.S. Citizenship and Immigration Services (USCIS) is out at the agency, the latest shakeup at the department charged with implementing President Trump's immigration agenda, according to multiple reports. Lee Francis Cissna, who took over as USCIS director in October 2017, sent a letter to agency staff on Friday evening confirming that he had submitted his resignation effective June 1, saying he submitted it "at the request of the President," CNN reported. "As an immigration law and policy professional dedicated to the rule of law like so many of you, I appreciate that this opportunity to serve was a unique experience," Cissna wrote in the email thanking staff and looking back at his tenure at the agency, according to CNN.

Several months ago, Politico published a profile of Cissna highlighting his civil servant career preceding the political appointment and his own family's immigrant background. Some found the path between his past and recent history serving under the Trump administration at odds. During the Trump administration, he led an agency designed to provide service to immigrants seeking visas, citizenship, and other benefits through a transformation into an enforcement agency as it implemented Trump policies with a "workmanlike dedication." Politico says, "From his perch atop USCIS, he’s issued a steady stream of policy changes and regulations that have transformed his agency into more of an enforcement body and less of a service provider. These changes have generated blowback from immigrant advocates, businesses and even some of his own employees. Leon Rodriguez, who served as USCIS director under President Barack Obama, said the agency is sending a message “that this is a less welcoming environment than it may have been before.”

Examples of USCIS policies include the establishment of a “denaturalization task force” that pledges to investigate immigration fraud and strip away citizenship in such cases, a memo that allows visa officers to deny applications without first requesting more evidence or notifying an applicant, and curtailment of the refugee program. Coming soon is a controversial proposed regulation that could prevent immigrants from obtaining green cards if they or their family members have used a public benefit, which is expected to include everything from food stamps to health insurance programs.

Trump is reportedly expected to tap former Virginia Attorney General Ken Cuccinelli (R) to be the next head of USCIS. Cuccinelli served as the top law enforcement official in Virginia from 2010 to 2014. His expected appointment comes as Trump has pushed for the administration to take a more aggressive posture on addressing what he has called a crisis at the U.S.-Mexico border.