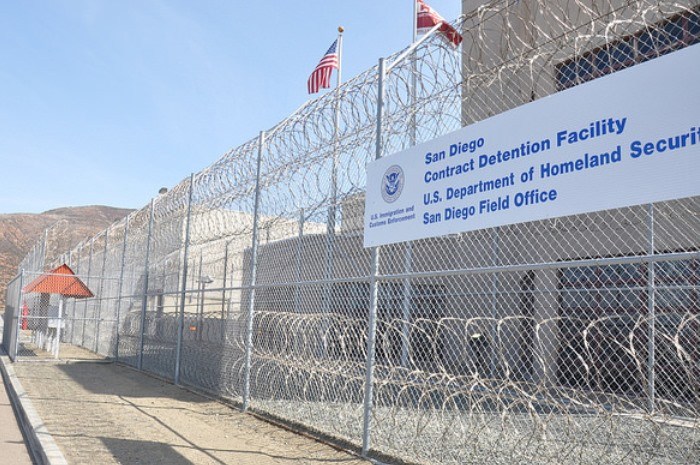 Photo via Freedom for Immigrants

“See! They have open bays!” the ICE agent proudly proclaimed. We peered in through the windows that were covered in wire mesh and followed the stairs with our eyes up to the second level. There we saw jail cells without doors that created the illusion that the prisoners had freedom. The lower level is the common area, and on the far side of it is a small concrete courtyard surrounded by chain link fence and concertina wire. The prisoners in this section can at least get some sunlight and fresh air there. This is the Women’s Low-Level Security Section at the Otay Mesa Detention Center. The prisoners are dressed in navy blue jumpsuits with the word “DETAINEE” in bold white letters across their backs. They are the lowest security threat and therefore have the most freedom, including being able to “volunteer” to do tasks such as clean bathrooms for $1.00 a day. The Low-Level Security prisoners make up the majority of the prisoners at Otay Mesa.

The prisoners with the Highest-Level Security due to a strong criminal history or those that are prone to violence, wear red jumpsuits. When we entered the Law Library, we encountered ten male prisoners in red jumpsuits looking through books, trying to find information to help them with their cases. Looking up from their work, they smiled in acknowledgment of us. In any other setting there would be no cause for alarm. However, the fact that they were being supervised by a single female librarian, makes me doubt the level of their security risk.

At Otay Mesa they call their prisoners “detainees,” not “inmates,” as if their word play makes what is going on there acceptable. The majority of their over 1000 “detainees” aren’t criminals. They are people who risked their lives to come to the US in hopes of being granted asylum, due to the dangers they faced if they stayed in their native countries. If the majority of the people imprisoned at Otay Mesa are asylum seekers and not criminals, then why are we imprisoning them?

- posted by KitJ on behalf of Angela Palacios