This week Colorado joined a small but growing list of places offering state financial aid to undocumented students. Governor Jared Polis (formerly of my college town, Boulder Colorado) signed into law House Bill 1196 allowing undocumented students to apply for and receive state financial aid. The bill passed the House 41-24 with all Democrats in favor and all Republicans opposed; the Senate passed it 21-13 with several Republicans joining Democrats in favor. During discussion of the bill, legislators estimated the average award in state financial aid to be $2,250. A legislative liaison for the Colorado Department of Higher Education said there are 1,350 undocumented students statewide who will now become eligible. The law builds upon the 2013 ASSET bill that charges undocumented students in-state tuition. The package of bills is significant because undocumented immigrants are ineligible for federal financial aid and some states restrict provisions to Deferred Action for Arrivals recipients -- an important limitation for those whose DACA status is in limbo since the program's rescission. (Private scholarships may be available. See this college guide for undocumented students for a list and other general advice; a prior post mentioned the Paul and Daisy Soros Fellowship for New Americans, which is open to students with any immigrant status.)

Nationwide 6 states offer state financial aid to undocumented immigrants: California, Minnesota, New Mexico, Oregon, Texas and Washington. Most require that, like Colorado, the student is subject to the same verification requirements for eligibility to participate in in-state tuition programs.

NCSL provides a summary of the history of tuition equity and text of state laws here. The full report includes the map below, which now requires an update for Colorado. 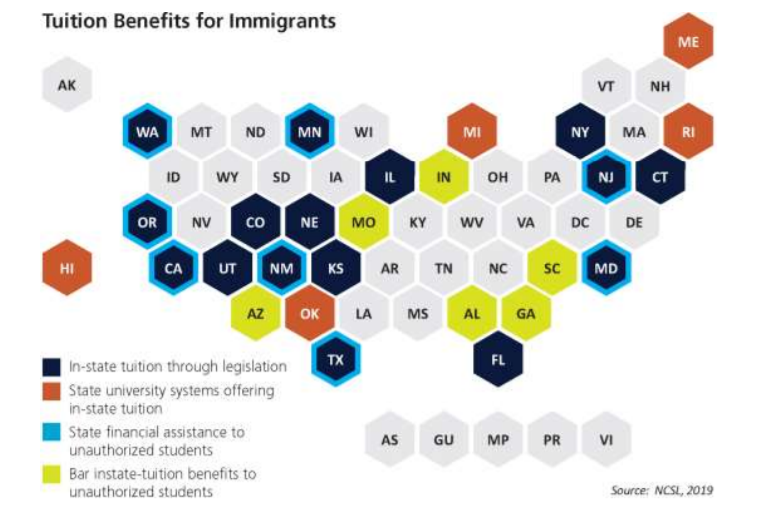