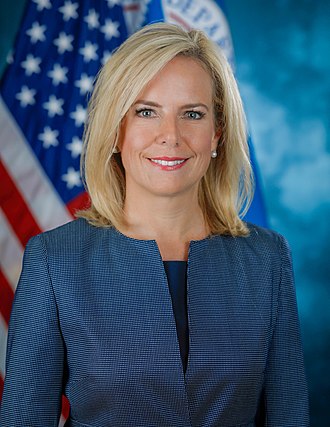 CNN reports that, in a letter to lawmakers, Secretary of the Department of Homeland Security (DHS) Kirstjen Nielsen has requested Congress for the authority to return Central American unaccompanied children to their home countries if they "have no legal right to stay."  The letter was first reported by NBC News.

Nielsen claims that the inability to deport these children has resulted in the daily detention of hundreds of Central American children and ultimately being placed with sponsors in the United States.

Nielsen also proposes measures to allow DHS to keep migrant families in custody throughout their immigration proceedings, as well as a plan for Central Americans to apply for asylum in their home countries.

Here is the letter.

“Today I report to the American people that we face a cascading crisis at our southern border.  The system is in freefall.  DHS is doing everything possible to respond to a growing humanitarian catastrophe while also securing our borders, but we have reached peak capacity and are now forced to pull from other missions to respond to the emergency.”

“Let me be clear:  the volume of ‘vulnerable populations’ arriving is without precedent.  This makes it far more difficult to care for them and to prioritize individuals legitimately fleeing persecution.  In the past, the majority of migration flows were single adults who could move through our immigration system quickly and be returned to their home countries if they had no legal right to stay.  Now we are seeing a flood of families and unaccompanied children, who—because of outdated laws and misguided court decisions—cannot receive efficient adjudication and, in most cases, will never be removed from the United States even if they are here unlawfully.  The result is a massive ‘pull factor’ to our country.”

The statement concludes as follows:

"Secretary Nielsen sent a letter yesterday to Congress highlighting the severity of the crisis, especially the danger posed to children by the journey to U.S. borders and the realities of a system reaching peak capacity.  This week, after many months of diplomatic negotiations, Secretary Nielsen signed a historic regional compact this week with representatives of the Northern Triangle—El Salvador, Guatemala, and Honduras—to confront the crisis at the source.  The countries agreed to work with the United States to combat human smuggling and trafficking, crack down on transnational criminals fueling the crisis, and strengthen border security to prevent irregular migration.  The Secretary also met with senior officials from the Government of Mexico to discuss ways to quickly address the crisis and stem historic migration flows through Mexican territory, while ensuring all individuals legitimately fleeing persecution receive appropriate humanitarian protection."