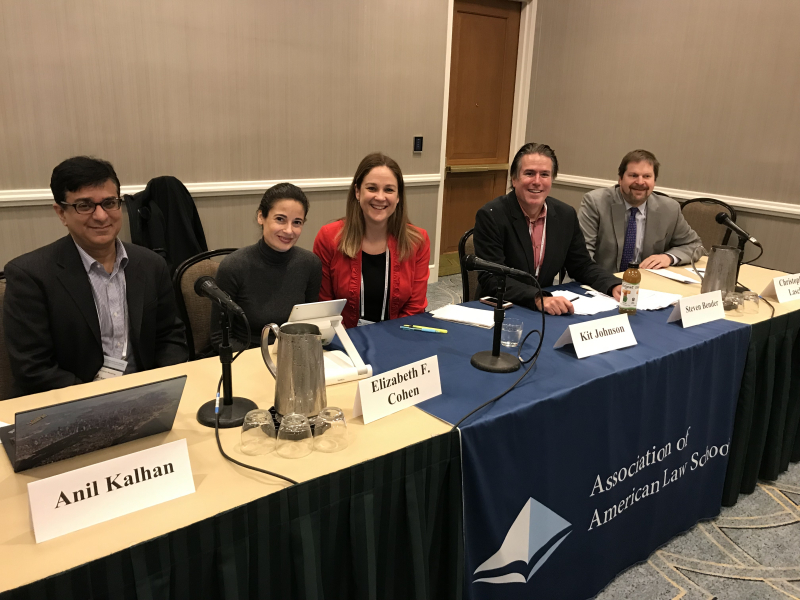 As Anil Kalhan noted in his introductory comments, many immigration scholars and advocates have been operating in a reactive, defensive mode since the presidential election.  The goal of the panel was to think more proactively by identifying the foundational values underlying immigration law and policy with an eye towards rebuilding the future.

Elizabeth Cohen delivered a presentation that focused on the relationship between citizenship and time and was based on her book, The Political Value of Time.  Amongst other things, she discussed the role of time in the legal practice of assigning citizenship, how the passage of time impacts citizenship, and how for some categories of people no amount of time will ever result in citizenship.  Her comments also noted the particular attention that legislators paid to time in developing citizenship standards in the late 1700s and early 1800s.

Kit Johnson’s presentation was drawn from her article, Theories of Immigration Law, 46 Arizona State Law Journal 1211 (2014).  She focused on immigration law values of the past, and the justifications given by political leaders for their making immigration law choices.  She identified four categories of argument: (1) domestic interest, as shown by a “we want/don’t want these people because they will/will not benefit the US as a whole” attitude (see, e.g., the Soviet Scientist Immigration Act of 1992), (2) national values (whatever those values are claimed to be, e.g., Lautenberg Amendment specifically protecting asylum seekers for religion-based claims arising out of adherents to Judeo-Christian faiths), (3) individual rights (premised on the idea that the migrant has a right to something, e.g., family-based migration), (4) global welfare (operating from the assumption that the US is part of the world and we therefore owe something to the world, e.g., refugee law). She noted that often, one or more of these arguments is at play.  In the Trump Administration, Kit observed that the only rationale Trump has adopted is the one centered on domestic interest.

Steve Bender encouraged us to think about immigration law as a person, especially that individual’s personality, both in the past and in the future.  Focusing first on the past, Steve described the immigration law “person” as old, racist, bigoted, patriarchal, homophobic, disability-shaming, classist & poverty-shaming, politically biased, stingy, narcissistic, unapologetic.  He provided specific legislative or policy examples for each of these traits.  Turning to the future, he asked how immigration law might evolve in the future to reflect more compassion and reason.  Steve’s book, Mea Culpa: Lessons in Law and Regret from US History, offers some suggestions, including the creation of more positive narratives about immigrants, and reliance on interest-convergence strategies.

Chris Lasch asserted that contests over “sanctuary” (defined as attempts to disentangle local crime control systems from federal immigration control) serve as a site for discourse about values.  He suggested that sanctuary-related debates have not provided robust room for civil rights-based discourse, in large part because litigation strategies have hinged on legal doctrines that question the scope of governmental authority (e.g., Separation of Powers, Spending Clause, Tenth Amendment), more so than rights (e.g., Fourth Amendment, Equal Protection).  Chris spoke about three specific areas, in which he has written and litigated extensively: (1) immigration detainers, (2) threats to defund sanctuary jurisdictions, and (3) courthouse arrests.  With respect to courthouse arrests, he also critiqued the continuing domination of narratives involving immigrant criminality.  Using sanctuary as a lens, Chris suggested that we may be witnessing the weakening of critical civil rights values, even while recognizing the importance of pursuing pragmatic litigation strategies in court.

A robust discussion followed, with participants commenting on the excellent quality of the presentations. The panel should be available through the AALS podcast (AALS member log-in required).