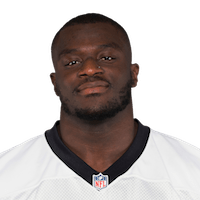 It is hitting playoff time in the NFL season and here is an upbeat story.

Jonathan Jones for Sports Illustrated reports that, in his first-ever NFL regular-season game, Carolina Panthers defensive end Efe Obada had an interception, a sack, and had a sack-fumble overturned on review.

"Born in Nigeria, Obada was trafficked with his sister from the Netherlands (where he was living at the time) to London when he was 10 years old. We don’t know much else about his story—Obada has never fully shared it—except that at 22 he discovered American football and played in five games for the London Warriors of the BAFA National League. The Cowboys found him on an international scouting trip in 2015, and since then he bounced around four different NFL teams before finally getting a game jersey . . . with the Panthers."

Obada was "discovered" while playing American football for the London Warriors.  The team’s defensive coordinator had been a coaching intern with the Dallas Cowboys in 2014.  Obada participated in an unofficial workout for "America’s team" that year and the Cowboys signed him to their 90-man roster.  Obada later was waived and unsuccessfully tried to catch on with the Kansas City Chiefs and Atlanta Falcons.

Obada ended up in Carolina. The NFL introduced its International Pathway Program for foreign players in 2017, and four players with potential were chosen to join a team’s practice squad and be given an exemption as the 11th player. The NFC South was drawn at random, and the Panthers got Obada.