Asylum Decisions and Denials Jump in 2018

"Fiscal year 2018 broke records for the number of decisions (42,224) by immigration judges granting or denying asylum. Denials grew faster than grants, pushing denial rates up as well. The 42,224 decisions represented a 40 percent jump from decisions during FY 2017, and an 89 percent increase over the number of asylum decisions of two years ago." (emphasis added). 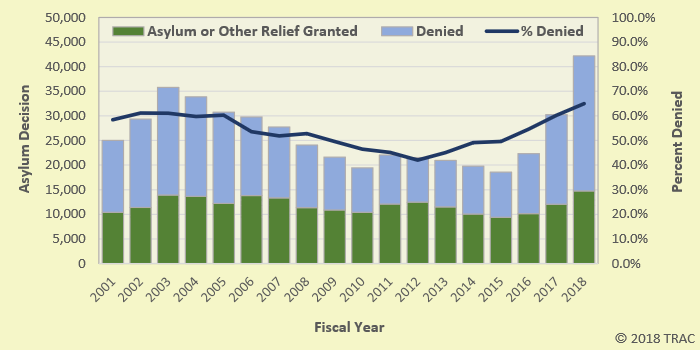 As discussed in the report, former Attorney General Sessions' intervention in BIA rulings to facilitate case closures appeared to have had an impact.

As always, I'm looking for the content of your site was full and specialized thanks

Immigration is a hot topic, although I do not think genuine asylum seekers should be punished. It's important to remember that people who are seeking refuge aren't necessarily the course of their circumstances.

That's the major flaw: we are considering someones welfare and applying that to rigid legislation and policy. It's sometimes extremely difficult to assess whether someone is a 'genuine' asylum seeker or refugee and therefore not exactly an 'illegal immigrant'.

Hopefully, this year, the changes in immigration brought forward from both sides of the senate will bring major reform and changes both for genuine asylum seekers and their families. 2019- let's do it.

This article is great. I like it very much. Thank you.