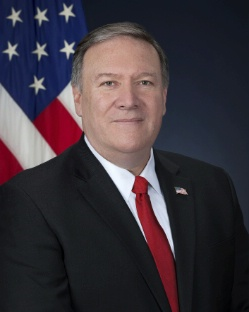 Here are the Secretary of State Mike Pompeo's remarks on the latest refugee admissions numbers:

Robert O'Malley and Stephen Pomper on Politico note that the 30,000 refugees "is the lowest number in the history of the nearly 40-year-old resettlement program. In so doing, he answered the depressing question experts have been asking for the past several weeks: Would the administration stay put at the record-low level it set for itself in 2018 — 45,000 refugees — or seek to plumb new depths in the coming year?"

Julie Hirschfeld Davis in the New York Times reports that "[t]he number represents the lowest ceiling a president has placed on the refugee program since its creation in 1980, and a reduction of a third from the 45,000-person limit that Mr. Trump set for 2018."