I just received this email from the National Immigration Forum:

WASHINGTON, D.C. — Today the Department of Homeland Security announced that it is ending protections for Salvadorans who sought refuge in the U.S. following El Salvador’s 2001 earthquakes.

The decision affects more than 260,000 Salvadorans in the country with Temporary Protected Status (TPS), who make up the largest share of TPS recipients. Additionally, more than half of Salvadoran TPS beneficiaries have resided in the U.S. for 20 years or more. The U.S. Department of State currently has a Travel Warning in effect for El Salvador, citing widespread gang violence and one of the highest homicide levels in the world.

Business and faith leaders are among the groups that also had encouraged an extension, and mayors from 19 cities signed a letter asking for an extension for El Salvador last Wednesday.

“This is a deeply disappointing decision that will not only disrupt the lives of TPS recipients and their families, but devastate the local economies they have contributed to for years,” said Ali Noorani, Executive Director of the National Immigration Forum. “Congress has a responsibility to act in the best interest of our nation by legislating a permanent solution that allows current TPS holders to contribute fully without fear of deportation.” 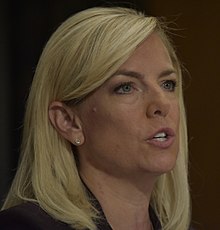 WASHINGTON— Today, the Secretary of Homeland Security announced her determination that termination of the Temporary Protected Status (TPS) designation for El Salvador was required pursuant to the Immigration and Nationality Act. To allow for an orderly transition, she has determined to delay the termination for 18 months. The designation will terminate on Sept. 9, 2019.

The decision to terminate TPS for El Salvador was made after a review of the disaster-related conditions upon which the country’s original designation was based and an assessment of whether those originating conditions continue to exist as required by statute. Based on careful consideration of available information, including recommendations received as part of an inter-agency consultation process, the Secretary determined that the original conditions caused by the 2001 earthquakes no longer exist. Thus, under the applicable statute, the current TPS designation must be terminated.

Following the 2001 earthquake, El Salvador received a significant amount of international aid to assist in its recovery efforts, including millions of dollars dedicated to emergency and long-term assistance. Many reconstruction projects have now been completed. Schools and hospitals damaged by the earthquakes have been reconstructed and repaired, homes have been rebuilt, and money has been provided for water and sanitation and to repair earthquake damaged roads and other infrastructure. The substantial disruption of living conditions caused by the earthquake no longer exist.

Additionally, in recent years, the U.S. government has been repatriating individuals back to El Salvador - more than 39,000 in the last two years - demonstrating that the temporary inability of El Salvador to adequately return their nationals after the earthquake has been addressed.

To allow for an orderly transition, the effective date of the termination of TPS for El Salvador will be delayed 18 months to provide time for individuals with TPS to arrange for their departure or to seek an alternative lawful immigration status in the United States, if eligible. Salvadorans in the United States who benefited from TPS may still receive other protections under our immigration system for which they are eligible.

The 18 months will also provide time for El Salvador to prepare for the return and reintegration of its citizens. During this timeframe, DHS will work with the Department of State and the Government of El Salvador to help educate relevant stakeholders and facilitate an orderly transition. In addition to materials posted online, DHS components will participate in outreach activities such as teleconferences, town halls and roundtables to ensure that affected populations have a full and accurate understanding of their rights and obligations.

Only Congress can legislate a permanent solution addressing the lack of an enduring lawful immigration status of those currently protected by TPS who have lived and worked in the United States for many years. The 18-month delayed termination will allow Congress time to craft a potential legislative solution.

Salvadorans with TPS will be required to re-register for TPS and apply for Employment Authorization Documents in order to legally work in the United States until the termination of El Salvador’s TPS designation becomes effective Sept. 9, 2019. Further details about this termination for TPS, including the re-registration period, will appear in a Federal Register notice. Salvadoran TPS beneficiaries should not submit re-registration applications until the re-registration period is announced through the Federal Register notice.

Miriam Jordan for the New York Times reports on the end of TPS for Salvadorans. For another report from the West Coast, click here.