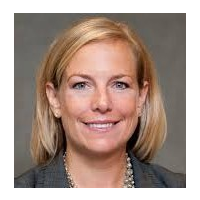 Nick Miroff for the Washington Post reports that the Senate yesterday voted to confirm Kirstjen M. Nielsen (profiled here) as the next secretary of the Department of Homeland Security of White House Chief of Staff John F. Kelly to lead the federal agency responsible for carrying out many of President Trump’s most ambitious domestic policy plans.

Nielsen, 45, developed a reputation for fierce devotion to John Kelly as his deputy at the White House and before that as his chief of staff at the Department of Homeland Security, which he ran from January until July.

An attorney (Virginia Law)  and cybersecurity expert, Nielsen will be the first DHS secretary with previous experience working at the agency.

In October, President Trump nominated Nielsen to be the new Secretary of the Department of Homeland Security, replacing acting secretary Elaine Duke.

The Senate confirmed Nielsen's nomination by a 62-37 vote.

"Nielsen joined the Trump administration in January 2017 as chief of staff to then-Homeland Security Secretary Kelly after having shepherded Kelly through the confirmation process. She earned Kelly’s respect, running a tight ship at DHS, and moved with him over to the White House as Kelly’s deputy when he was named Trump’s chief of staff.

Her brusque style hasn’t won her many friends, and some DHS employees are concerned about her ability to run such a large organization. “The pick is not being received well,” an official, who insisted on anonymity, told Newsweek. “While she’s probably had some great jobs, it doesn’t speak to the level of running a 200,000-person law enforcement agency.” Still, Nielsen is seen as a hard worker and popular with Republicans. However, almost immediately after the announcement of her nomination, she was embroiled in controversy. The White House held a cocktail party in her honor in the East Room and later billed taxpayers $8,000 for the event, which was attended by corporate lobbyists."