How L.A. Mariachi Helped Make One of Blondie’s Biggest Hits

Josh Kun for LA Weekley explains "How L.A. Mariachi Helped Make One of Blondie’s Biggest Hits." He explains how the band rin ecorded their fifth alum AutoAmerican in Los Angeles:

"Among the songs produced during those early September sessions was "The Tide Is High," originally written by Jamaican legend John Holt and recorded by his rock-steady trio The Paragons in 1966. Blondie's version replicates the original's classic Caribbean reggae strut — a sound that had vibrantly left its mark on the sound of new wave and punk scenes in New York and London — but then throws in a Latin American curve ball. They nudge it closer to nearby Mexico and Cuba: The melody is played by trumpets and violins in the style of modern Mexican mariachi and the percussion section surrounds a steel drum with congas and timbales typically found on rumbas and mambos. It wasn't just the city's sunshine mythology and seismic doom that had made their way into the new album. It was the city's position as a key geographic and cultural hub within greater Latin America, the city's history as a mecca of Mexican music and as a laboratory for experiments in Afro-Cuban dance music in East Los Angeles pasta restaurants, downtown ballrooms, Sunset Strip supper clubs and Hollywood soundstages. The city had indeed rubbed off." 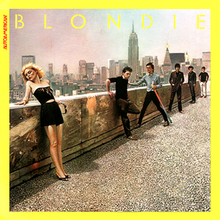