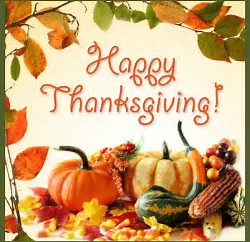 Happy Thanksgiving!  It is a time for family, friends, and community.  We at the ImmigrationProf blog wish you and yours the very best.

This piece. first published in Bloomberg View oin November 2013, offers much food for thought as we celebrate Thanksgiving 2017.  It begins:

"There were no Americans at the first Thanksgiving. The newer set of immigrants, recently arrived from England, considered themselves thoroughly English. And so they remained: Almost two decades after the feast, in describing the Pequot War, William Bradford lamented an Indian attack `upon the English at Connecticut.'”

"The Pilgrims no doubt would’ve been shocked to find that their cultural potluck at the first Thanksgiving was also a family reunion with a long-lost, if rather diluted, European clan. But peoples, like lands, change over time. In 1621, the English, Dutch, French and Spanish were the strangers at the American feast. They conquered and stayed. But the breadth of human history, and the expanse of human migration, tells us finders are not forever keepers. And the strange is often more familiar than we know."