From the Bookshelves: IMMIGRATION AND THE LAW: Race, Citizenship, and Social Control by Sofia Espinoza Alvarez & Martin Guevara 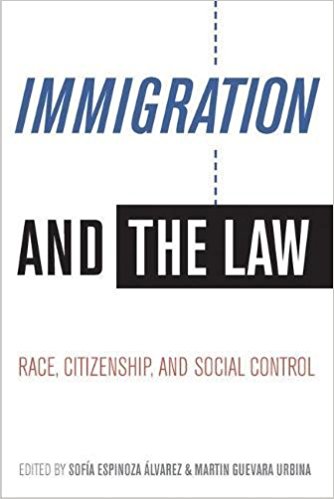 the era of globalization, shifting political landscapes, and transnational criminal organizations, discourse around immigration is reaching unprecedented levels. Immigration and the Law is a timely and significant volume of essays that addresses the social, political, and economic contexts of migration in the United States. The contributors analyze the historical and contemporary landscapes of immigration laws, their enforcement, and the discourse surrounding these events, as well as the mechanisms, beliefs, and ideologies that govern them.

In today’s highly charged atmosphere, Immigration and the Law gives readers a grounded and broad overview of American immigration law in a single book. With shifting demographics, a changing criminal justice system, and volatile political climate, the book is critically significant for academic, political, legal, and social arenas.

The contributors offer sound evidence to expose the historical legacy of violence, brutality, manipulation, oppression, marginalization, prejudice, discrimination, power, and control. Demystifying the ways that current ideas of ethnicity, race, gender, and class govern immigration and uphold the functioning and legitimacy of the criminal justice system, Immigration and the Law presents a variety of studies and perspectives that offer a pathway toward addressing long-neglected but vital topics in the discourse on immigration and the law.